In this tutorial, the Ken Burns effect, which is basically used with still images for panning and zooming, is created with pure CSS.

The CSS background-image property is used for specifying the images acting as the slideshow. While different CSS 3 properties like transform, z-index etc are used for creating the effect.

Have a look at the demo below where you may also find the code.

The demo of slideshow without JavaScript 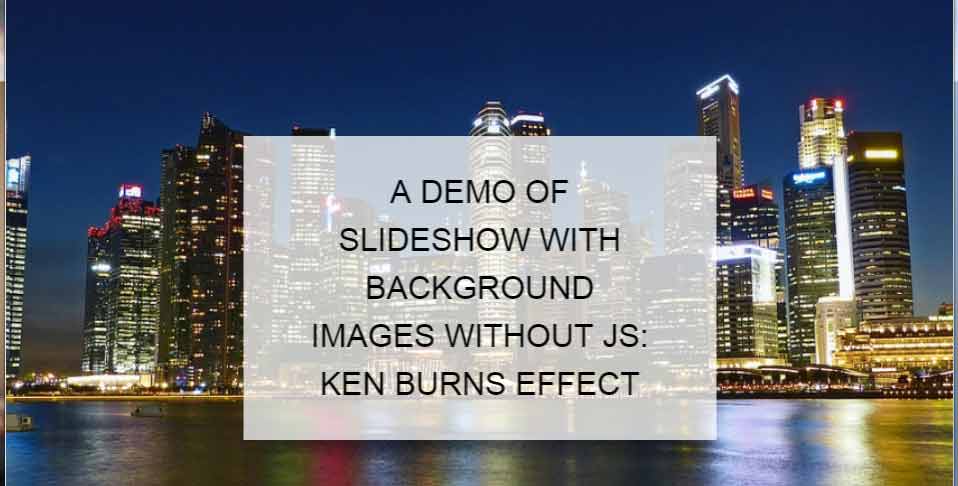 The markup used in the demo for background images:

You may add more images as the background. However, you have to update the “$items” variable in SCSS.

The compiled CSS and complete code can be seen on the demo page.

The uncompiled CSS can be seen here (Credit ibanez182 @ http://codepen.io/).

For adding more or less slides, you may either have a look in the CSS code of the demo page (for five or four slides) where the respective child with pseudo class are added after CSS compilation. For example, after adding the fifth slide, this CSS is compiled:

For making changes, go to the credit page given in above section. In the CSS part, change the number of slides as you want in the $items variable. You may also adjust the speed of animation and transition there along with other properties.

After that, get the compiled CSS and place in your external or internal CSS. Alternatively, you may do this manually by getting this code from the demo page of this tutorial.