The navbar component of Bootstrap 4 is used to create header navigation on your website. The navbar header menu may contain a brand logo, navigation links to the main parts of the website, dropdown menus, inline forms etc. The navbar is fully responsive that adjust to the user’s screen by using built-in classes.

The Bootstrap 4 also has built-in classes for creating the navbar that is fixed on top or bottom. There is also a class for creating a sticky menu as using navbar component.

I will show you all these examples along with coloring and customizing the navbar in this tutorial, so keep reading below.

A navbar example with different sub-components

Let me start with a navbar example that contains different elements. This navbar example includes a brand text, a few links and a dropdown menu with inner links. Besides, an inline form is also used for searching the website. Have a look at the output and complete code.

I will recommend you copy the complete code of all examples in your IDE and run it locally to see how it looks.

Note: As this menu uses a dropdown menu, it also requires you referring the Bootstrap JS file along with jQuery.

The same menu will look like this on the smaller devices (smart phones etc.): 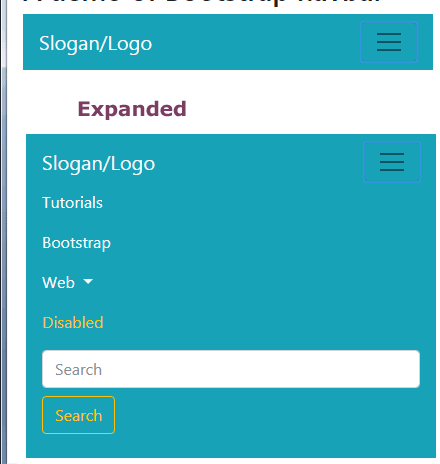 Exploring the components code in navbar

For using the logo/brand or slogan in the navbar, you may use the .navbar-brand class in an anchor tag. You may also apply this class to other elements, however, <a> works better.

For example, I used this in above example:

You may also use <span> with h1 as follows:

There, you may also set the logo image rather than using the text or text/logo combination as well:

The sample code for the logo:

See the complete code and output on the example page.

How to include dropdown menu in navbar

You may also include the dropdown menus in the navbar. Simply use the markup of dropdown menu (explained in its tutorial: Bootstrap 4 dropdowns) in the ,<li> tag with .nav-item and .dropdown classes.

How to use forms in navbar

The navbar also supports inline forms. These may be useful for site search form with a textbox and search button. You may also use login form or subscription form there.

For including a form in the navbar, use the .form-inline class in the <form> tag and place form controls inside it.

Have a look at the navbar with only form controls and button (a login form):

The code of navbar with a form:

See the sample code with the same form as in above example that is aligned right.

How to color navbar example

Until now you have seen various colored navbar examples. For coloring the navbar, you may use the built-in background classes or use the inline style tag and specify the background color there. You may also create a class in external CSS or under the <style> section.

You should use the .navbar-light for light color backgrounds and .navbar-dark for the dark background colors.

See the example below where different background color classes are used for creating the navbar: 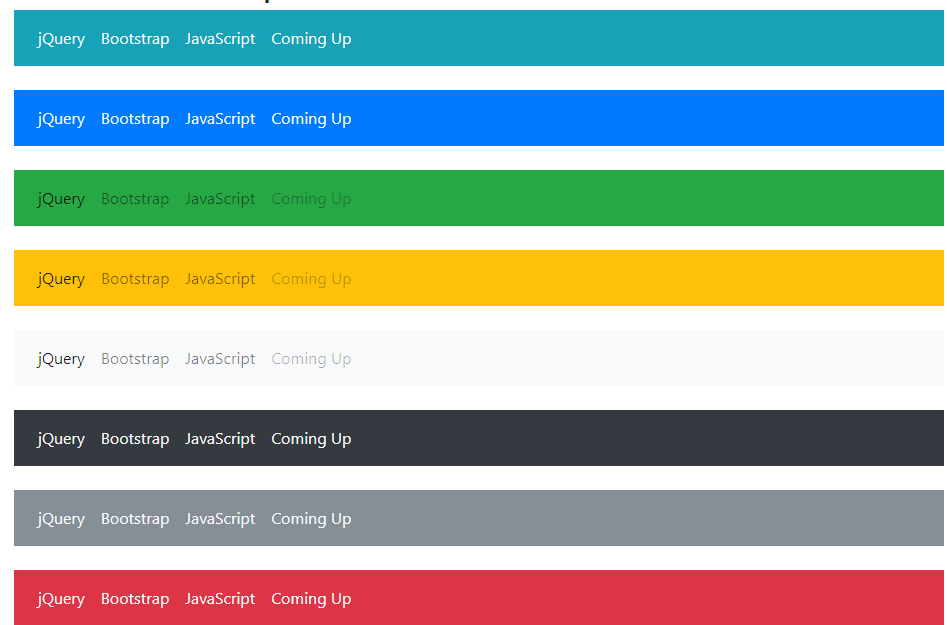 The complete code of info navbar:

See the complete code for other navbars as well on the example page.

Note: The text color is set at link tags.

You may also use some other background color scheme for designing the navbar that is based on Bootstrap 4. You may use the style attribute inline or use in external or internal CSS (under style section).

See the following demo where eight different gradient backgrounds are used for theming the navbar. All classes are placed in the style section under the <head> tag. The complete code can be copied from the example page:

One of the navbar markup:

Use the .fixed-top class in the <nav> tag for creating a navbar that is fixed on top of the page. Have a look at this demo where I used this class and some dummy text for scroll bar. Scroll down the demo page and see how top bar is fixed:

The <nav> markup is as follows for this example:

Similarly, just use the fixed-bottom class for making the navbar fixed at bottom of the web page. The above markup for bottom fixed navbar will be:

The example of sticky top navbar

The markup with sticky class for the above used navbar: