The hover method in jQuery

The jQuery hover method binds two handlers as the mouse enters and leaves a specified element like a link, a paragraph, lists and others.

You may execute the code in those handlers like changing the background colors, fonts, adding text, or some other actions.

This is how you may use the $.hover method:

The handlerIn part will execute as the mouse is brought in the specified element. While the handlerOut executes as the mouse leaves the element.

To achieve the same result, you may use the $.mouseenter and $.mouseleave methods as well, e.g.

See the following examples to see hover method in action where I will add and remove CSS classes to change the look of specified elements; div, HTML table etc.

An example of hover jQuery with HTML div

To demonstrate the jQuery $.hover method, I have created a div element which is assigned a CSS class as the demo page loads. As you bring the mouse over that div, the hover method executes where two functions are attached. See the demo online which is followed by a little description. 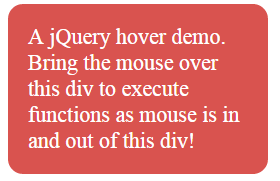 As the mouse pointer is brought in the div element, following code executes:

The second function in hover method executes as you bring mouse out of the div where the first CSS class is applied again.

An example of $.hover with HTML table to change CSS

In this example, an HTML table is created with CSS properties for table heading and data. The style is applied as demo page loads.

As you hover the mouse over the table data area, the hover method executes where instead of adding or removing a CSS class completely, I simply changed the background-color and text color properties by using the $.css method of jQuery.

See the demo online by clicking the link or image below:

The following handlerIn and handerOut functions are executed inside the hover method:

In this example, an HTML list is created with a few list items. As you bring the mouse over the list items, a span tag is added with some text ahead of the current list item. 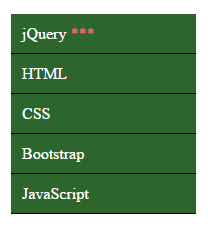 The hover method executes as you bring mouse over any link, that executed the following code:

In the first function, inside hover method, the <span> tag is appended with three ***. As the mouse pointer brought outside the menu item, the other function executes and removes that span from that menu item.