The jQuery $.on method

In a simple definition, you can say the $.on method is a longer version of event methods like click, dbclick, change, hover, keyUp, keyDown and others.

The jQuery allows you to use the shorthand of events like click event and other events. However, the .on method not only allows to use these methods alone but you can attach multiple event handlers by using it once.

For example, you want to perform the same action as user clicks, changes or presses a key in an element. Rather writing the code for each event handler separately you can specify all in single jQuery .on method. Similarly, you can perform different actions for different events by using single $.on method.

In fact, the jQuery on method is more than that. From 1.7 version of jQuery, the on method replaced delegate, live and bind methods as well.

The examples in this tutorial will show you different forms of using .on jQuery method. You can also see how .on method replaces other methods of jQuery.

In this example, I will use the single event handler in .on (with click) method. For that, I have created a div element with a border. As you click inside the div, an alert will be shown. See example by clicking the link or image below: 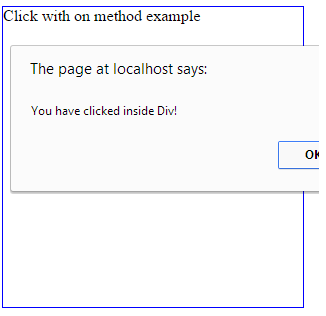 As you can see inside on method, the click event is given where an alert is also used:

The $.on method with click and change event handlers

Note that, multiple event handlers are separated by space. See demo by given links below: 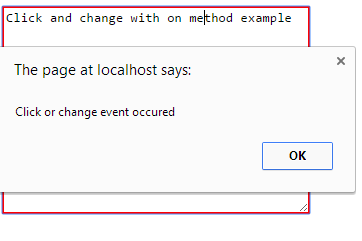 As you can see, multiple events are specified after jQuery on method (change and click) as follows:

Specifying multiple handlers are quite useful to perform the same action for different events. You can specify even more event handlers, just separate it by spaces. See this line:

You can see the .on with change, click, and mousenter. Now alert will be triggered as the mouse enters the textarea, as well.

An example of .on with colored div

In this example of jQuery on method, I have created five different colored div and a larger div to the right. The right div is kept white. I used .on jQuery method with each div element and used different event handlers for div as follows: 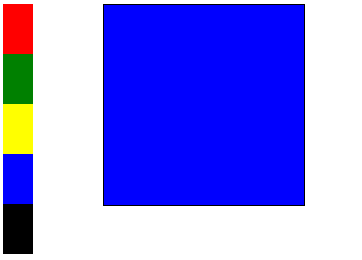 As you bring the mouse over red div, the color of the larger div will be changed to red as I used $.on with mouseenter and click events.

The green div color will be changed with double click  –

As you leave mouse from third div (which is yellow) the color of the right div will be changed to the yellow because $.on method is attached to mouseleave event.

Different functionality to events in $.on method example

In above examples, I have attached the same event handler to multiple events. By using jQuery $.on method, you can attach multiple events with different functionality as well. For example doing some action as mouseenter event takes place inside a div element like fading in its background color and returning it back to the same color as mouseleave event occurs in that div.

Following example shows how to use different functionality for different events.

This is done by using following code:

$.on method as replacement of live method example

As such the live method attaches one or more event handlers to specified element that executes for the parent as well as current or future child elements as well. From 1.9 version of the jQuery, this method is removed and replaced by $.on jQuery method.

The following example shows how .on method is used to replace live method of jQuery. In the example, I have created a parent div element with a child paragraph. Inside script section, the .on method is used to create the future child elements, i.e. paragraphs of div. A function, on_livefunction is created that shows an alert which is called in $.on method.

See live demo by clicking the link below or image: 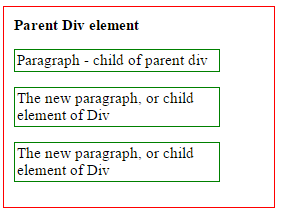 When you click on div or paragraph the alert will be shown in both cases. You have to specify event name(s) and function in jQuery .on method as I did in this line:

When you click on new paragraphs (child of div), the function will be called and executed and an alert will be shown just like in parent div element.

In case, you do not want to execute function or event handler to the parent element and just to child elements, the jQuery had delegate method which is also replaced by $.on method. See next section for learning how $.on method replaced the delegate method.

$.on method as replacement of delegate method

In delegate method, the event handler is attached to child element(s) of specified element. The child element(s) can be current or future elements. However, from 1.7 version of jQuery the preferred method to accomplish this task is by using $.on method.

If you gone through above example of using .on as replacement of .live method then it is quite easier to understand. You simply need to specify child element after giving event names in the parameters section of jQuery on method.

See working example of how you can do this: 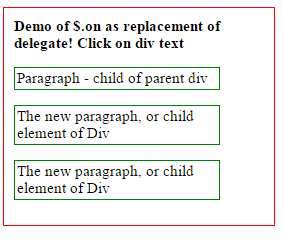 If you click on div text where it says “Demo of $.on as replacement of delegate! Click on div text” or paragraph, a new paragraph will be added by using insertAfter in script section, which is the future child of parent div. However, note the difference in code and output than above example here:

Where I specified ‘p’ as the child in $.on method. If you click on div text, no alert will be shown and just paragraph will be inserted. However, as you click on the current or new paragraph, an alert will be shown along with a new paragraph will be added. While in the case of $.live replacement of $.on example, the div was also showing an alert which means event handler (the function) was executing for both parent and child while in this case event handler only executed for the child element.

An example of $.on method with button click and animation

This is more interactive example of using the .on method of jQuery. In this example, I will create an animation by using a div element. The $.animate method of jQuery is used to create that animation. The $.on method is linked with the button’s click event.

As you click on the button, the .on method will attach an event handler on click event of the button. Have a look at live demo of this example along with code:

As you can see, the jQuery on method specifies click event along with calling a function animateex. The animateex uses the $.animate method that changes div properties and after completing, the animation calls another function animateback that takes animation back to its original style and at the end it also calls animateex function, so the process goes on.

Also note, for color animation I have included the jQuery UI library in above demo.