In Python, the ‘and’ is a logical operator that evaluates as True if both the operands (x and y) are True.

You may use this in the if statement for evaluating multiple expressions. See the following section for examples of using the ‘and’ operator.

Python ‘and’ example with if statement

How ‘and’ operator works?

This is to be noted that ‘and’ and ‘or’ return the last evaluated argument. In the case of x and y expressions, if x is false, its value is returned, otherwise, y is evaluated. See a demonstration below. 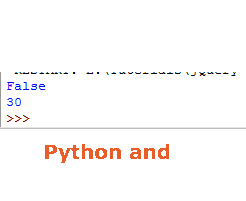 Using multiple ‘and’ operators including a string

You see, two variables are evaluated as true, while the third is false so else part executed and it displayed:

All or anyone is False

The bitwise operator & (and) example

There is also a bitwise operator ‘&’ (Bitwise AND) that operates bit by bit. See an example below of using the & operator in if statement:

You can see, it produced the same result as using the ‘and’ operator.