The Python lists are generally used to store a collection of homogeneous items. Python has built-in functions that you may use to append, delete, sort etc. items in the list.

I will explain lists along with its methods in detail with examples in the coming section; let me start by how to construct lists in Python?

I will show you examples of constructing the list in different ways with code that you may execute in your own system as well.

In this example, a simple list of numbers is created. A for loop is used to get through that list and print function is used to display list items.

After that, a for loop is used to display list items:

Similarly, you may create a list of string separated by commas as shown in the example below:

This is how a list of string is created and a for..in loop is used to display its items: 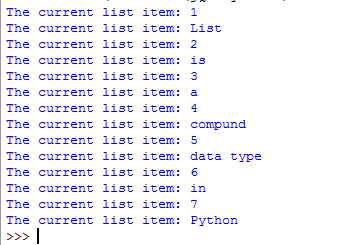 See the complete code and output on the demo page.

A demo of accessing specific items of a list

This is how a list is created and items are accessed and displayed in above example:

The following is the output:

An example of creating a list by type constructor

This is how range function is used to create list items:

Let us move ahead by using the built-in list functions like append, del, sort, len(), max, min and others.

An example of using the len() method

The len() method is used to get the length or total numbers of elements in the list.

See this example where a list is created and Python len method is used:

To remove the existing elements from the Python list, you may use the delete or remove methods.

Use the remove() method of the list if you want to remove by value. See the following example:

The code for removing the item:

If you want to delete by index number, then use del method as shown in the example below:

The sort() method is used to sort a given list from lower to higher numbers or alphabetically.

See the example below where a list of random numbers is created. After that, the sort method is used to arrange items from lower to high numbers.

The list is displayed before and after using the sort method:

The code for adding a new item by append:

Rather than adding a single item by using the append method, you may use the extend method to add elements at the end of a list.

The extend method adds another list at the end of the specified list. See an example below where two lists are created:

You can see, the items of lst2 are added at the end of lst1 by using the extend method.

If you require adding the new item at a specific position in an existing list rather at the end, you may use the insert method.

The insert method takes two parameters. One to specify the index number and the other is the item to add. See a demonstration below:

The code to insert an item at the specific position:

You see, an item, 25 is added after item 20. The new item is added to the given index number.