The ‘not’ is a Logical operator in Python that will return True if the expression is False. The ‘not’ operator is used in the if statements.

If x is True, then not will evaluate as false, otherwise, True.

A ‘not’ example  Not with ‘in’ example

Other logical operators: The and operator | OR operator

I will show you a few examples to make things clearer regarding how to use the not operator in the coming section.

Python not operator example with if statement

In the following example, a variable x is assigned a value 10. The ‘not’ is used in the if statement as follows:

See the code and result.

How not operator works?

In this demo, the x is used as follows with not operator:

The expression not x means if x is True or False. In Python, if a variable is a numeric zero or empty, or a None object then it is considered as False, otherwise True. In that case, as x = 10 so it is True. As x is True, so not operator evaluated as False and else part executed. See the same example below where the value of x = 0.

A Python not with ‘in’ example

In this example, I will show you how to use the ‘not’ operator with ‘in’. For that, a numeric list of six items is created. This is followed by using a for loop to iterate through the list elements and display their values.

After that, an if statement is used to omit certain numbers to be displayed. There, the not operator is used with the ‘in’ as follows: 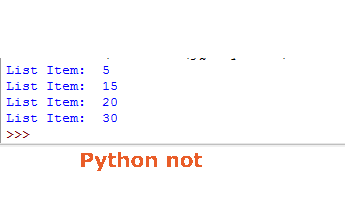 You see, the items that evaluated False as using ‘not’ did not display.