In Python, the errors can be categorized into two main categories:

The errors occur as a program is executed or running is called exception. These errors must be handled or a program will crash and may leave a confusion or bad impression on the user’s part.

For example, you are taking the user input that must be a number. Accidentally, a user enters a string and you have used this in a function that requires an integer. Then, an exception may occur and the program will crash.

As a Python programmer, you may handle these kinds of errors in the program by try..except..else..finally statements/clause and this is the topic of this tutorial. See the details of using these statements with examples in the next section.

Just for the information, the syntax errors are those that occur due to invalid syntax in the program. As you run a program, a message display and details of the error is displayed. For example, an if statement requires a colon at the end. If you do not provide it, a syntax error occurs as shown below:

Handling exception by try except example

Before explaining how try-except statement works, have a look at this example. A user is asked to enter a year which is number and program tell whether it is a leap year or not.

If the user enters a character like a-z, then a ValueError occurs. See, this is how it is handled by using the try-except. 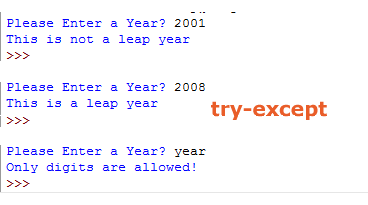 So, how try-except statement works?

The following section shows examples of multiple try-except blocks and later you may also see using the else and finally clauses examples with detail.

A Demo of catching multiple exceptions

In this example, multiple except clauses are used to catch and handle errors.  For that, a list of mixed items is created. A for loop is used to iterate through the list elements. In each iteration, the current item of the list is divided by a numeric type variable.

You can see, the program caught multiple errors by using try with two exception clauses. Each except clauses executed as the error occurred and displayed their respective messages.

Using except clause without exception name

The same example is used as in above case, except the error handler is only one; that handled any error. For the TypeError and ZeroDivisionError, the except handler executed and displayed the message.

You may also use the except clause that way after handling all the errors specifically, in case if an unexpected error occurs.

Using else clause with try statement

The purpose of the (optional) else clause in the try-except block is to enable executing the code if try-except does not raise an exception. 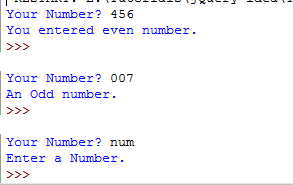 In the output figure, as numbers were entered and no errors raised so else part executed. The third time, a string was entered that raised an error, so error handler executed while no statement in the else executed.

There is another optional clause as working with try-except for catching errors in Python. This is called finally clause and it will execute in all circumstances. Whether an error occurs or not the finally clause execute before leaving the try statement.

See a simple example of using the finally clause:

Usage of the finally clause:

The general use of finally clause is releasing the external resources e.g. closing a database connection, closing a file etc. whether program ran successfully or not.