In Python and generally speaking, the modulo (or modulus) is referred to the remainder from the division of the first argument to the second.

The symbol used to get the modulo is percentage mark i.e. ‘%’.

In Python, the modulo ‘%’ operator works as follows:

The section below shows using the modulo operator in Python.

An example of leap year with modulo operator

The Python program below asks the user to enter a year. There, I used modulo (%)and used the remainder value to display the result of the entered year. If the remainder is zero, it is a leap year otherwise not a leap year. You may copy the code and run in your IDE or see the graphic below for a few values entered: 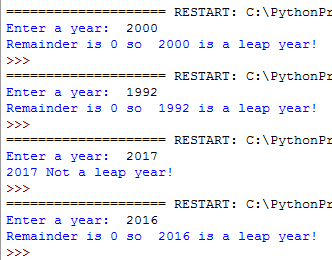 Getting leap year with modulo in another way

Another example of using modulo operator

Still unclear about using the modulo (or modulus) operator. The following example should make things clearer.

There, I am simply using the two numbers with ‘%’ operator and assigning the remainder value to a variable. The variable value is displayed that should clarify how it works:

An example of modulo with floating point numbers

Just like the above example, I used floating point numbers with modulo operator and displayed the remainder:

This example uses negative numbers with the modulus operator.

How ZeroDivisionError is raised as using modulo operator?

As mentioned earlier, the ZeroDivisionError error is raised if the right argument is zero as using the modulo operator.

In the following example, I used 0 towards the left and right sides including integer and floating numbers:

You can see, using zero in left side produce 0 result without any error. However, using zero on the right side raised an error.