For single line comments, you may use the # (hash character) in the Python programs. For multi-line comments, use the triple quoted strings. Both of these ways are explained below with examples.

A brief Intro about commenting

Writing comments is a very important aspect of any programming language. The comments enable programmers writing things that are important to the context of code. Similarly, multiline comments may be required to write the purpose of code on top of the program along with author information etc.

Python parser ignores the comments within the program.

For example, you have a nested loop that goes to three levels. Before starting the outer loop, you may write the purpose of all loops. After some time, this is natural to forget even your own code or you have to remind things yourself. If you look back after a year or so, you may understand the purpose by reading those comments.

Similarly, if you have written a class or functions that are usable by other programmers. This will be helpful for them to read some guidelines within the code if they require to modify or maintain things in the future.

You may write the single line comments by the hash character (#). Just start a string with a hash sign and write a comment in a single line as shown in the example below:

A few things to be noted in above example regarding Python comments:

An example of multiline comments

By using # character, you may write a single line comment that goes to the end of physical line. You have to add # for each new line.

Unless they are used as docstrings, they generate no code.

Recommendation for block or multiline commenting

The official document recommends using the consecutive # characters for block commenting. So, in spite of using the triple quoted comment:

And if you have paragraphs, then use only a hash character in new line as follows:

If you are using the IDLE editor for developing Python programs, you may use the short-keys or menu options.

For commenting a line, bring the cursor to the line that you want to comment and press Alt+4. To uncomment an existing comment, press Alt+3. 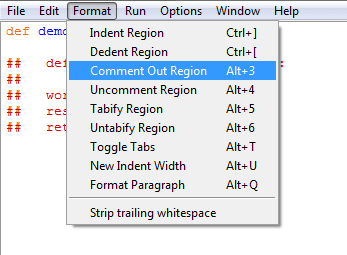 The comment/uncomment options are available under the Format menu. Use “Comment Out Region” / “Uncomment Region” for comment and uncomment the line, respectively.

It adds two ## characters at the beginning.