The group by clause:

The purpose of the GROUP BY clause is to get the summarized view of the database table(s).

This is how you may use the GROUP BY statement in MySQL:

The points to note as using GROUP BY statement:

The examples of using GROUP BY clause

For showing how GROUP BY clause works, we are using a table that contains the records of employee’s salaries paid every month in a departmental store. The table name is tst_emp_paid_sal and it contains the following columns with description:

The query for getting total salaries paid to each employee

The first query will return a result-set for all employees in this table with the SUM of salary paid. For that, we will group the data based on employee IDs and get the total of salary paid for each employee. For getting the total, I used the SUM function as follows:

The GROUP BY Query:

Complete table data/ with GROUP BY and SUM: 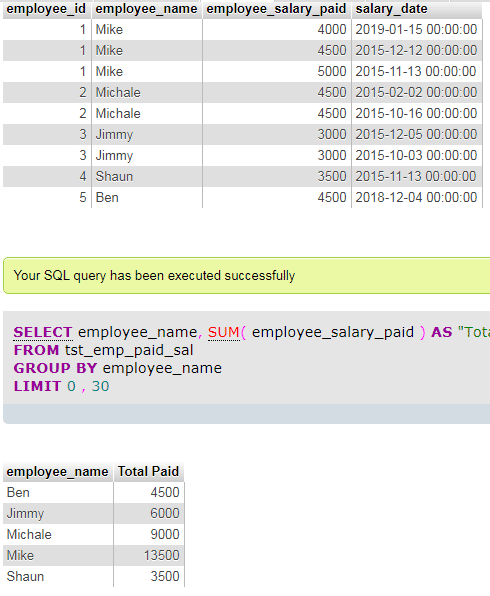 In the above graphic, you can see first query retrievs full demo table data by using a simple SELECT statement. The other GROUP BY query returns the result-set for each employee’s salary total.

Keep an eye on the complete table data as the next examples will show only demo query record-sets.

Querying a specific employee’s total salary by GROUP BY

By MAX function, we will get the maximum salary paid to each employee using SELECT/GROUP BY statement: 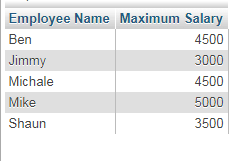 You may compare this result-set with the first graphic with complete table data and see the maximum salary paid to each employee.

Similarly, by using the MIN function, we may get the minimum salary paid to each employee: 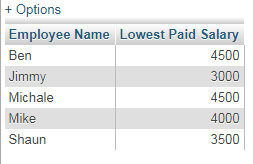 Count of salaries for each employee using GROUP BY

The COUNT function can also be used with the GROUP BY clause. In that case, rather than returning the total count of all rows, the COUNT will return the number of times the salary paid to each employee.

Thus the mix of GROUP BY and COUNT will return the count of each group result rather than a single value for the whole record-set. The example below shows how: 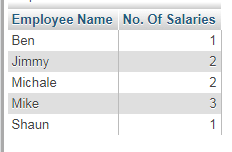 A query using MySQL GROUP BY with HAVING clause

In one of the above examples, we used WHERE clause to filter the record of an employee. What if you require to return the result based on the aggregated data. For example, only displaying the records of those employees which SUM of salary exceeds 5000 or more.

For that, you may use the HAVING clause with the GROUP BY as shown in a query below: 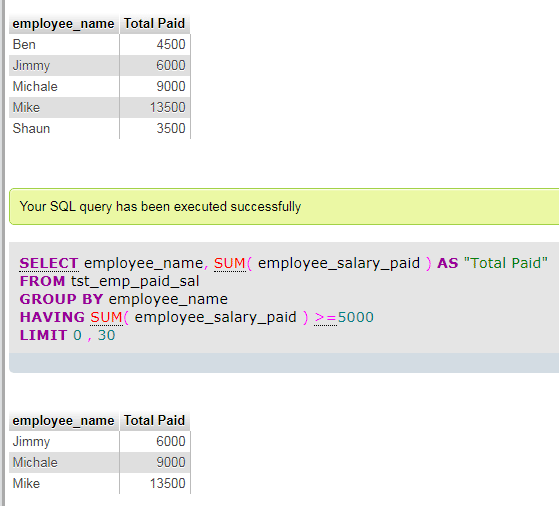 You can see, the first result-set shows all rerecords without the HAVING clause. The second result-set displays the records for those employees only whom total of paid salary is greater than or equal to 5000.