Bootstrap 4 has built-in classes for dealing with text alignments as center, right and left along with text-weight (bold), wrapping, overflow, transform and italic text.

In this tutorial, I am going to show you live demos of aligning text center, right and left. I will also show you using float helper classes along with text alignment classes for images. 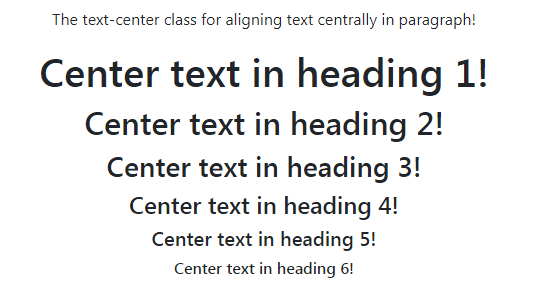 The example of aligning text right 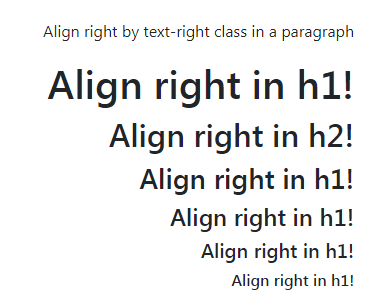 The code for aligning right example

The example of using text-left class

Have a look at the output and code by visiting the demo page:

The markup for using text-left class:

If you want to keep text aligned center or right for large or small devices specifically as per viewports then use the text-align property as explained below with examples.

For making text aligned centered in large devices only, use the text-lg-center class. To test this, copy the code from the example page in your editor and run the code. Now, look at the screen size >=1200px and in small size to see how it changes its alignment:

Align center in medium and large viewports only

For making text aligned centered in medium and large viewports only while left aligned in small viewports, use the .text-md-center class in elements like <p>, <h1>, <h2> etc.

Have a look at the usage and try it with various screen sizes:

For center alignment of text in all devices/viewports except the extra small (less than 576px) use the text-sm-center class. The demo code is shown below:

The code to try:

Similarly, Bootstrap 4 has built-in classes for aligning right or left (specifically) for various screens/viewports. The following classes are available:

Not only you may use the .text-center or other text classes for aligning texts but images as well. In the following example, two images are aligned right and center by using the Bootstrap 4 text alignment classes as follows:

The markup for right and center aligned images by text classes:

You may also use helper float classes for aligning images to left or right. The following float classes are used in the example below:

See the output and get complete code from the demo page.