Although, various database servers have tools for creating a table by using GUI/Wizards. There, you may give the database table a name, create columns with data types and may also set constraints like NOT NULL, Primary keys, auto-increment etc. (depending on the database server like MS SQL Server, MySQL, Oracle, DB 2 etc.)

The GUI or wizards may vary, depending on the provider; however, one common way of creating tables in different relational DBMS is using the CREATE Table statement of SQL.

An example/syntax of SQL CREATE Table statement is:

A few points based on this SQL code:

The following section shows a few examples of creating tables. I will show you creating tables step by step and adding columns, constraints and primary keys etc.

In this example, we used the CREATE TABLE command for creating a table. I am using MS SQL Server for demonstration – so any figures shown below are from SQL Server database.

The query for creating the Sto_employee table:

The above command should create a table, sto_employee. I used sto_ prefix for the table name as supposedly, this table is used to store the departmental store’s staff information.

A few columns with different data types are created, but no primary key is added to the table. So, if you view that table in the design mode, this is how it looks: 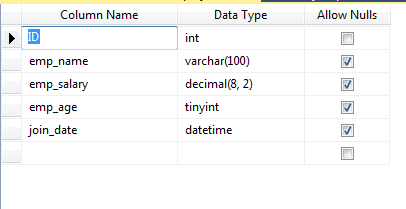 Adding a primary key in a table example

The primary key is created at the table level for uniquely identifying the rows. The column with primary key constraint cannot contain a NULL and duplicate value. In our above CREATE TABLE example, though we created ID with NOT NULL constraint, however, it may contain duplicate values; as this is not a primary key.

The SQL code below shows how to create the same table with ID as the primary key. The design view is also shown so you may see the difference:

The table design view after executing this command:

You can see the yellow icon for the ID field now. That represents a primary key in MS SQL Server.

Note:  A primary key may consist of one or more columns in a table. For using two or more columns, just separate column names by a comma. For example:

Rather than first deleting the table and recreating again; as I did for above example to add the primary key, you may also use ALTER TABLE command for adding a primary key in the table.

The ALTER TABLE is a separate topic that is covered in its own tutorial, just for the sake of understanding, see an example below.

Suppose, we have created the table as in the first example. Now, we will add a primary key for the created table as follows:

The ID column should be primary key in the sto_employee table after executing above command.

Before showing you the command of creating a foreign key, consider the table created in above examples as the parent table.

Suppose, we need another table, sto_emp_salaries_paid that will be used for storing the salaries paid to employees every month.

Now, have a look at the CREATE TABLE command for sto_emp_salaries_paid table with a foreign key in MS SQL Server, MS Access, and Oracle databases:

The table with a foreign key should be created by above command. If you try entering an emp_id in the table that does not exist in the sto_employee table then an error should be generated.

Using SELECT INTO statement for creating/copying a table

In MS SQL Server, you may use the SELECT INTO command for copying the table structure and date from an existing table to the new table.

You may copy complete structure/data or specific columns and rows to the new table by using column names and WHERE clause in the SELECT INTO statement.

The following query shows an example of creating a new table with three columns from our example table, sto_employee.

You may add the WHERE clause for only copying the specific rows in the new table from the existing table.

Note: This SQL code is applicable in SQL Server.

In Oracle database, you may use the CREATE TABLE…AS command for copying the existing table into the new table. An example query is:

An example query in the MySQL database for creating and copying the table data:

This should create a new table and copy the data as well.