In SQL, the variable is the way of storing a value temporarily. Various types of variables can be declared and used in SQL databases.

The variables in Transact-SQL are generally used in the batch or stored procedures. The DECLARE statement is used for declaring a variable. For example:

After a variable is declared, this is initialized as NULL.

For assigning a value to a variable, the SET or SELECT statements are used. For example:

You may also assign a value to the variable at the time of declaration. For instance,

The next section shows you a few running examples of declaring, assigning and using the variables in SQL batch or procedures – so keep reading the rest of this tutorial.

A simple example of declaring and assigning a value

In the first example, we will declare a string variable of the type VARCHAR and assign it a value by using DECLARE statement:

A variable @str_name is declared and a value is assigned.

The example of printing variable values

In this code snippet, I declared two variables; one of an int type and the other is of varchar. After that, the values are assigned to these variables by SET keyword.

This is followed by displaying the variable values by using print:

The output in MS SQL Server:

You can see, two variables are declared together by using the DECLARE statement.

In the following example, I have declared a variable, assigned it a value and then used it in the SELECT statement.

In the SELECT statement, the sto_employees table columns are retrieved and the variable is used in the WHERE clause for specifying the employee name to be searched in the table:

A variable is assigned a value at the time of declaration and used in a SELECT query with SQL LIKE operator. The query searches all employees which name begins with letter ‘J’:

The example of using a variable for transaction rollback

A varchar type variable is used for managing the transaction as follows:

The record-sets before and after: 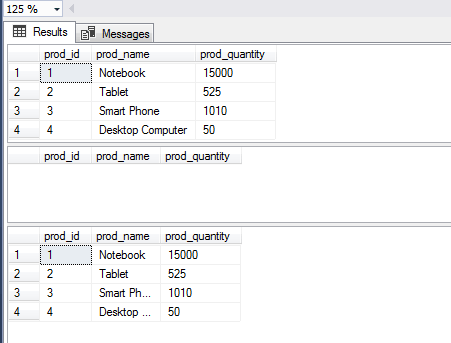 The DELETE command removed all records from the table and these are recovered by ROLLBACK.