In its simplest definition, the Git push command can be taken as uploading the content to the remote repository.

After adding a feature, making changes or other tasks in the local repository, you may use the push command for uploading these changes to the remote repository (e.g. Github) so other team members can see it and may update their project accordingly.

A simple example of using the push command can be:

Note: The git push -u command is equivalent to -set-upstream. The -u flag is used to set origin as the upstream remote in your git config. As you push a branch successfully or up to date it, it adds upstream reference.

As you push local branch with git push -u option, that local branch is linked with the remote branch automatically. The advantage is, you may use git pull without any arguments.

This is followed by providing the branch name. I used master that you may replace with your branch name.

By using single push command, you may upload one or all branches by using –all flag. For example:

In the next section, we will go through a simple example of creating a local branch, adding files and then using the push command for uploading the content on the set remote repository.

I will also explain how to use push with –force flag if simple push command is failed for some reason and why you should avoid this – so keep reading.

Rather than using the push command straight, the beginners may want to see changing the local repository and then pushing content to the remote repository – with the snapshots.

So, first of all, let us create a remote and local repository. The remote repo is on Github website with the name of push-tst. Similarly, a local repository is created in a directory named push-test. This is empty at this stage.

I started the terminal (Git Bash) by right-clicking inside the directory and ran the following command:

This is followed by setting the remote repository path as follows:

Please change it as per your repository path (as this may be removed later).

I named it as origin, the default for this example.

This is followed by running the git pull command for synchronizing the local repo with remote:

This command downloads the remote repository branch “master” into our local repo.

Next, I created three text files in the local repository. This is followed by running the git add command under the master branch:

This command should add three created files into the Git index to commit and then push to the remote repository.

After adding three files, I performed a single commit:

This resulted in the following output in terminal:

After the successful commit, we are good to perform a push to the remote repository, so that all these files are available online (to other team members). In reality, those will be code files, images, or any other meaningful objects.

As our remote repository name is origin and branch is master, so this would be the command to upload content from the local master branch:

You can see, the terminal shows three files along with our remote URL (repository).

If we refresh the remote repository, this should display the files with the commit message as shown below: 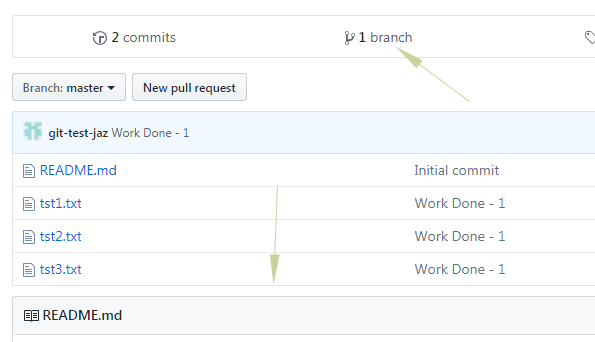 As we performed single commit for all three added files, so each file is showing the same commit message online.

If you want multiple branches at one “push” then this can be done by using –all flag in push command.

For demonstrating that, I am creating three branches on top of the master branch in the local repository. This is followed by pushing to the online repo.

The local repository should contain four branches including the master branch.

You may checkout to any branch and add files, make other changes etc. before pushing it online. Suppose, we have done with this and now want to push all these branches by the single command.

The result in terminal:

If you refresh the online repository, this shows four branches as below:

First, a point of caution; the –force flag with the push command must be used carefully. It might be considered dangerous, particularly if you are working in a team environment.

The reason is, you might find errors or Git refuses to push your changes made locally as using the simple push command. This could be due to conflicts with your local and online repo. For example, in a team environment, a teammate has added a new file or made some changes in the online repository while your local repo is behind that point.

In that case, if you want to push your local repo with new changes by simple push command then it will raise an error.

Under this situation, if you run the pull command with force flag e.g.

Then, Git will update the online repository by your local repo. The work done by other teammates may be lost. So, one has to be very careful and you must be sure as using the force flag in the push command.

The example of force push

Anyway, I will show you an example of –force option where an issue is occurring as I simply running the push command.

For the example, I will call the above developer as dev1 and another developer is working on the same repository as dev2.

The dev2 pulls the remote repository from the same point where dev1 uploaded in above example. That is, it contains three text files in the master branch.

After downloading, the dev2 added a test.php file for some feature and after completing the task decided to upload on the master branch:

He makes the commit and pushes the changes to the remote repository:

This is followed by a push command:

The push command went smooth and updated the remote repository as shown below:

At the same time, the dev1 worked on another file – say text file four (tst4.txt). He added the file and run the commit command locally:

Now, as a file is ready to upload, he runs the simple push command:

And the result is:

The Git rejected the push command as some other is working on the same repository.

The dev1 decided to run the push command with –force flag:

And the result in the terminal is a success:

However, as you look at the online repository, following is the result:

You can see, the tst4.txt is added while the commit of dev2 is gone. That means the remote repository is updated by the local repository of the dev1.

The example of using other remote name and branch

Until now, we have been using the origin as repository name and master as the branch name. In certain scenarios, you may require using some other repo name and branch in the push command.

In this example, we will look how to push changes on some other branch and with different repository name.

The target command for this example is:

Where demo1 is the same remote repository on Github that I used in above examples and feature-br is a branch based on master branch.

For that, I have created another local directory and started Git Bash there. In the Git terminal, ran the following commands:

Adding a repo with the name of demo1:

So, this is where the name of the repository is set if other than the origin.

After successfully downloading all content by pull command, creating a local branch based on the master branch:

This command is the shorthand for creating and checking out a branch i.e.

After creating a branch, I added a feature file “footer.php” for demo only:

Committing the file into that feature-br branch:

Finally, to the point of executing our target command;

This results in creating a new remote branch and a commit ahead of the master branch:

If this branch is clicked, this should display the footer.php file along with other files in the master branch.