The SQL SUBSTRING function is used to return a part of the string by specified position. For example:

In certain scenarios, we have columns that store large strings. However, this may be required to get only part of the large string for certain purpose.

For getting the part of a string from long string, you may use the built-in function of SQL i.e. SUBSTRING.

The SUBSTRING function can be used as follows:

Where an expression can be a string column name etc. The start parameter species from where SUBSTRING function should start extracting in the given expression.

The length specifies the number of characters to extract in the given expression.

An example of SUBSTRING function

In the SUBSTRING function, the expression “Hello World” is assigned and start and length arguments are given as follows:

The value specifies to start extracting string from the letter ‘W’ and go till letter 5 i.e. World.

The example of SUBSTRING SQL with table data

Now, let us look at a real example of using the SUBSTRING function. For that, we have a phone field in our example table, sto_employees that is used to store the staff information.

The phone is stored in the following format: 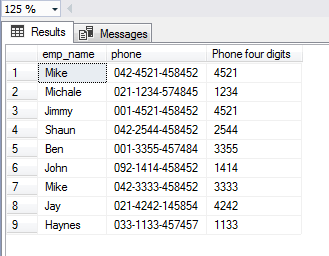 You can see the third column is displaying the second part of the phone number.

Similarly, you may get the third part only by changing the starting position and length argument as follows: 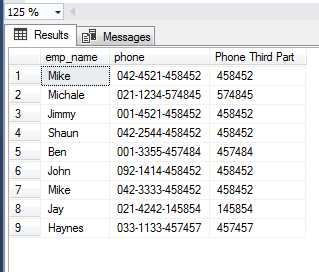 The third column shows last six digits of the phone numbers for each employee.

What if a negative starting position is given?

You can see, the SUBSTRING function returned the last character from each product name.

How to get a substring from right in SQL Server?

If you require getting the substring from the right of a string then SQL Server has another function called RIGHT.  For example:

So, the RIGHT function takes an expression and length to be returned for the substring.

As mentioned earlier, the SUBSTR and MID functions in MySQL database can also be used to extract the substring from a specified string.

The following query shows using the MID function where we will get the four length substring started at position three in the product name column. 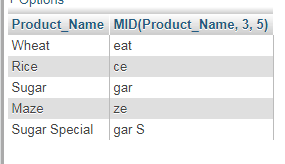 You can see, it yielded the same result as we used SUBSTRING function.

Finally, also see an example of SUBSTR MySQL function for the same table and positions in the products table: 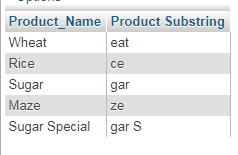 You can see the same result in the above resultant table graphic.