There will be different scenarios when you require undoing a commit in Git. Depending on the type, level of criticalness you may use different options/commands for reverting back the commit in Git.

In this tutorial, you may find different ways of undoing the previous commit.

Method 1: Using the reset command with hard and soft options

This command will make the Git move the pointer of HEAD back to the previous commit. So, your last commit is undone and any files added or changes made are removed.

Basically, the reset command has three forms of invocation. The one is used in the above command i.e. –hard. The other two are:

By using the –soft flag, you may keep the changes in the last commit while moving the HEAD pointer back to the last commit. So, for example, you do not want to discard changes made: files added, or any other changes. For that,  you may use the –soft in reset command as used below:

If you run this command after the above command:

You will see, the changes in the last commit are preserved, however, the HEAD pointer is moved back to the previous position.

Still unclear, let us go through adding files in a branch, committing the changes and then doing hard and soft operations for undoing changes in the example below.

The example of undoing commit in Git

To understand the undo process by using Git restart with –hard and –soft flags, let us start with the basics.

For the demo, I have created a remote and local repository. The remote repository is created on Github and local on a Window system.

By right clicking on the local system folder, I opened the Git Bash (as explained in this tutorial). Fast forward, I ran a few commands as shown in the graphic below – for synchronizing the remote branch with local, creating a new branch locally and started adding files: 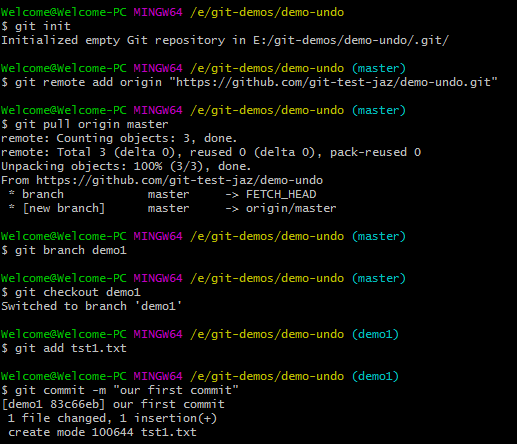 Most probably, you already know about all that, this is just for beginners (others may skip to next heading below). So, quickly these commands are executed until our first commit:

For synchronizing the remote repo with local.

(downloading any content in the remote repository to the local)

Creating the first local branch where we will commit three times and undo the committing to level 1 and 3 later.

This command is executed so we may add files in this branch.

After creating tst1.txt file in the local folder, execute the add command for adding a file in demo1 branch:

The above graphic shows all these commands and output messages on Git Bash.

Pushing these changes to the remote repository:

If you refresh you remote repo, it should display the locally created branch and a text file with the commit message.

For learning how to undo commits in Git, I have created two more text files (tst2.txt and tst3.txt) on local repo and executed the commit commands as follows:

Commit2 with a message:

You can see three files are listed as a result of running $ ls command after making this commit for the demo1 branch.

Note: I ran commit command three times as I want to show you reverting back to the last commit as well as to initial level i.e. to the point where we had no any text file.

Running the reset command for undoing the last commit

Finally, we are reached to the point where I will execute the reset command.

The first test is running the reset command with –hard flag. See how it outputs:

This is followed by running this command:

The output of these two commands:

Running the $ls command also shows only two files now. If you go to the local repo folder, you will see the tst3.txt file is also removed. 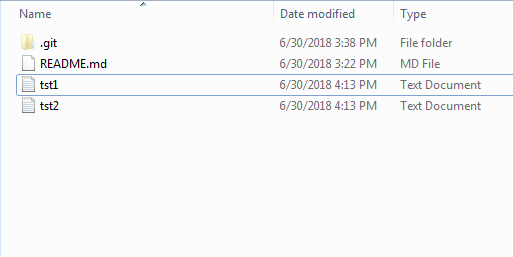 This is because of the –hard flag with reset command. So, you have to be careful as reverting back to last commits. You may lose your important files if undone carelessly. I will show what happens if we used –soft flag.

Reverting back to first commit rather than last commit example

If you want to go back to first or any other commit rather than the last commit, you may provide a desired number with the HEAD i.e.

For the example, I am again adding the third file (tst3.txt), making the commit again and then execute with the HEAD~3 option as follows:

This is followed by:

And finally executing the reset command:

YES, you can see the $ ls command is listing only the README.md file – no text files that we committed by first, second and third commits.

Again, if you go to the local repo folder, it should only have the README.md file – all text files should have been removed.

Now let us go through using the –soft flag in reset command for undoing the last commit. For that, I am again adding three files and performing the commits one by one for each change as in above section.

Running the reset with –soft

Before running reset command, I executed the status command as follows:

This is followed by reset with –soft:

This command tells Git to move the pointer to the one step back without removing the changes– i.e. our second commit (before that, it was on commit 3).

I again ran the status command. See what are the output of all the commands on Git Bash: 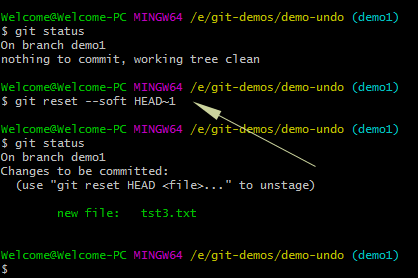 You can see, the second status command shows new file: tst3.txt as compared to the first command. Also, as I checked the local repo folder, it shows all files (tst1.txt, tst2.txt, tst3.txt) unlike the reset with –hard flag that showed only two files (tst3.txt was removed).

On the basis of above experiment, we may conclude that if you require to undo the last commit when you are sure to discard everything associated with that commit, then use the reset command with –hard flag.

If you require keeping the changes (like holding the code files or any other changes) then use the reset with –soft flag.

We also saw, not only you may undo the last commit by reset command but may go to any level of commits i.e. earlier commits as well by specifying the number in HEAD~.

As with every commit, a message is also saved. This is quite likely that spelling mistakes may occur as well as the message may be incomplete or more information is required to be added then the last commits’ message.

In the case when you only require changing the message in the last commit, you should not use the reset command to go through all process again.

Instead, you may use easier option – commit with –amend flag.

In the following example, I have added a text file in the local branch. This is followed by using the commit command with a message. I also used push command with –force flag for submitting the changes in the remote repository.

In the message, I “accidentally” made typos and want to fix the message. This is how the message is fixed.

Running the commit with the wrong message:

There, I actually wanted to use the word Commit rather Comic. However, I also ran the push command and changes were “live” on Github:

Again executed the push command to fix the message in the online repo as well:

The result in online repo:

You can see, the amendments are made in the online repository without using the reset command.

You may give the shortcode of SHA1 or full code in the revert command. The following commands show reverting back the last commit and any other specified commit by revert command.

For the example, I have added another file (tst4.txt) file in our above-created branch and ran the commit command as shown below:

Now execute the revert command with that code, for example:

It will take to another terminal asking to enter the message. After entering a message, press the following keys (one by one):

The output of the test during this test is: 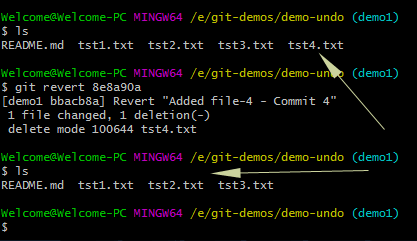 You can see, the $ ls commands show four files before running the revert command. After that, it is showing only three files, thus the commit of tst4.txt file is undone.

To get the SHA-1 code for the HEAD, you may run this command:

This should return full long SHA-1 that you may use in the revert command. Similarly, this command returns the shortcode of HEAD:

Or, simply use the following command:

That should return handy information about the commits. Get the code there for the required commit that you want to revert.