As the name suggests, the merge command is used to join the histories of two or more developments. For example, if your main branch is the master branch and you started working on another branch called feature branch. You added a new feature e.g. footer for the website in that feature branch.

In terms of executing the command, this is how it works at its basic:

Create a new branch based on master:

After the work is done for adding the footer component, you may merge it into the master branch as follows:

The above command should merge the feature branch commits into the master branch, so both branches are now at the same level.

Still need for explanation? No problems. The next section explains with some screenshots and more details on how to merge a command, resolve the conflicts and reverting back the merge.

Did you know? As you run a pull command e.g. $ git pull origin master, the Git performs fetch and merge operations. The fetch downloads the content from remote repo which is followed by the merge operation.

The example of merge git command – step by step

For demonstrating how merge command works, I have created an online repository on Github website. I have also set up a local repository in a directory with the name of m-repo-2.

The local repository is synchronized with the online repo and the master branch on both repositories contains the same files/commits as shown below:

On the remote repository:

For checking the files on local repo, I ran the $ ls command and see what is displayed:

From this point, you got a task of adding the footer in your project. The file name for the footer is “footer.php”.

For that, we are creating a new branch footer-feature which is based on the master branch by running this command:

Basically, this command is the shorthand for these two commands:

Assuming that the work on footer.php is completed, let us add this file in the footer-feature branch.

This is followed by running the commit command:

The output of commit and after running the $ ls command again gives the following output:

The changes are added in the new branch and this is time to merge this with the master branch – first locally and then pushing in the remote repository.

Merging with the master branch

Just for the sake of confirming things, I ran the $ ls command for master branch:

You can see, there is no footer.php file.

You see, our new footer component is added in the master branch.

Run the push command as follows for updating the remote repository:

Or, if simple push command does not work, you may run:

Note: Generally, you should run push with –force option very carefully.  Otherwise, this is considered dangerous. Only use –force option if you know what are doing.

You can see, the new feature file is also visible on the remote repo:

Use case – What if master and feature branch conflicts while merging?

In this section, we will look into resolving the conflicts occurred due to the multi-developers environment. Suppose, two developers are working on the same project pointing to the same remote repository.

A developer is working on the footer component as in the above case while the other developer is given a task to add a sidebar. We will use following names for active branches and files:

Both developers have updated their local repositories with the remote Github repo by this command:

The developer 1 completes the task by creating a new footer-feature branch and merged it with the master branch (please see the above section for commands of creating to merging the branches).

Finally, he pushes the changes to the remote repository so it is available to the other team members.

Meanwhile, the developer 2 is working on the sidebar.php file under sidebar-component branch in his local system.

He also completes the work and merges the sidebar-component branch with the master branch in local repository as follows:

This should create a new branch and checked out as well.

After creating the sidebar.php in the working directory, now add it to the branch:

Check out to master branch and perform a merge so that remote repository can also be updated with sidebar component based on the master branch.

As this developer tries to push the work by this command:

The git returns an error message as shown below:

As you run this command, Git simply asks to enter a message that why this merge is necessary.

Enter a message in the editor and press: Esc : wq from the keyboard.

The developer 2 local repository should be updated and the local directory should show the footer.php file as well.

Now, if you run the push command again:

It should upload the sidebar.php file in the remote repository as shown below:

Until now, the work is smooth. Only a simple merging issue raised and we easily resolved this.

Scenario # 2 – working on the same file

Consider both developers have the same file: footer.php on their local repository.

The file contains the following simple code for the demo only:

The first developer starts changing the file and adds his code. For example:

He commits the changes and pushes to origin master:

The operation is successful and remote repository is updated without any issues.

Meanwhile, the developer 2 also started working on that file and after completing the changes has the following code:

He also commits it to the local branch (master) and then runs the push command for making it online in the remote repository. However, the following error is raised:

The option is to first download the remote branch again by pull command:

And this is the output:

That is, it resulted in a conflict of code in the footer.php file.

If you open the file from local directory to your editor, you will see code like this:

So, it contains the code of both developers and Git adds markers to distinguish it wherever conflict occurred.

How to resolve this conflict and merge?

One of the ways for resolving this conflict is to open the filer in the editor or within Git. Find out the markers that Git identified as conflict and remove those after carefully looking at the code. 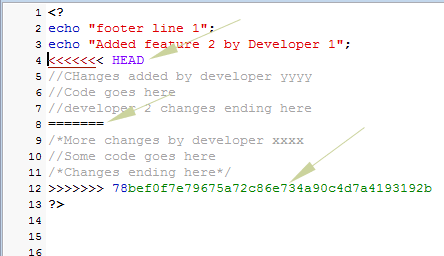 You can see three markers in the above graphic. After removing these, add the file and then commit:

After that, run the status command:

nothing to commit, working tree clean

Now, execute the push command for making changes on the remote repo:

After the push is successful, check the online repo. This should display the commit message with the updated file as shown below:

How to revert a merge?

After a merge is done by using the git merge command, you may undo this by using the reset command. For example:

This command will undo the last commit.

You may learn more about how to undo commits in Git in detail.