The strlen function of PHP

The strlen function is used to get the length of a string in PHP programs.

The function returns bytes unlike the general conception of returning the number of characters in the given string.

This is how you may use the strlen function to get string length:

The strlen PHP function may be useful for different scenarios, for example, the HTML div should display only a limited number of characters from the user’s feedback, which is stored in a database. You may get the length of string and do some programming to display only limited string.

An example of PHP string length by using strlen function 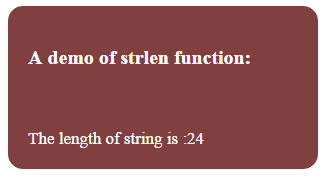 This is how the PHP strlen function is used in above example:

The output of the above example is:

The length of string is :24

An example of having leading and trailing spaces in a string

The PHP’s string length method, strlen, will treat leading or trailing spaces as length while returning the total length of the given string. In this example, a leading and trailing space is added in the above example’s string. See what length is returned: 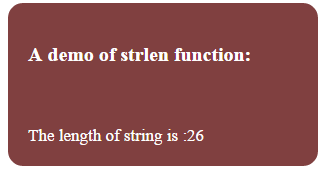 You see, it returned 26 because two spaces were added in the string.

What happens if you use arrays in strlen function

See the output when an array is used in the function: 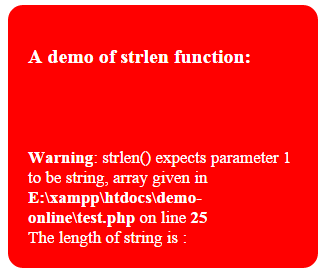 You see, it returns null and as such it is just a warning, the string in echo statement displayed and the program did not crash.

What if an array element is specified in strlen function

This time, an array is used in the strlen method, however, an element is given there with its index number. The following array is created:

After that, the strlen method is used and see the output: 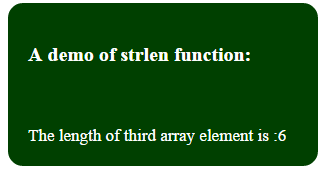 The third element in the array is:

An example of using integer in strlen function 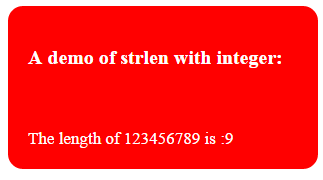