The for loop in PHP

PHP supports different types of loops to iterate through a given block of code.

These include for loop, while and do while and the foreach loop.

The for loop is the most complex loop that behaves like in the C language.

See also: the while loop

Following is the general structure to use the PHP for loop:

See the following examples to learn more about for loop PHP.

An example of for loop to print numbers

In this example of for loop, I will display the numbers from 1 to 5. See the example and code online which is followed by a little description of each step.

The following code is executed in the example:

An example of decrementing the last expression

In this example, the value of the last expression is decremented in each iteration. 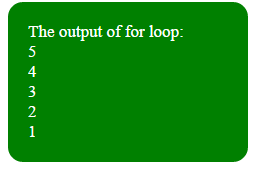 The following for loop is used in the above example:

It displayed the output in an HTML div element from 5 to 1. 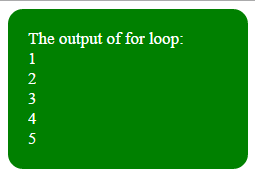 This is how the for loop was used in above example:

An example of incrementing by ten in for loop 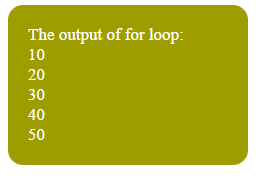 The following PHP code is used:

An example of using for loop with PHP array

It is common to use a for loop to iterate through arrays in PHP. In the following example, a numeric array is created with five elements. After that, a for loop is used with array function (count) to get the total elements and display in an HTML div tag. 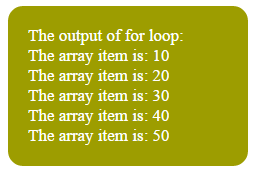 First of all, an array is created with five elements:

After that, the for loop is used to display the array elements:

The count function returns the total number of array elements that acted as specifying the highest number loop should go on.

A string array example with PHP for loop

In this example, a string array of three elements is created. After that, a for loop is used to display the array elements.

The following PHP code is executed in this example: