The PHP empty function is used to determine if a variable is empty or not.

It will return True if the given variable is empty and false if it exists or a non-zero or more than zero characters etc.

I will explain further in the later part of this tutorial, first syntax and live examples of using the empty function.

Syntax to use empty function

This is how you can use the empty PHP function:

Where, the variables can be of different types like an integer, string or even an array etc.

An example of using the empty function

In the following example, a string variable is declared and given a zero character value, i.e. “”. After that, the if condition is used with the empty function.

See the code and output by clicking the link below: 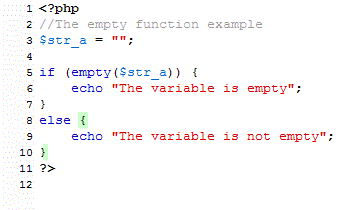 You can see, the variable is shown as empty. That means if a string variable is declared and even assigned a “” value it is still taken as empty. However, if it contains some value like “abc”, it will not be considered as empty.

An example with integer type variable

In this example, an integer type variable is declared and assigned a 0 value. See the output and description below: 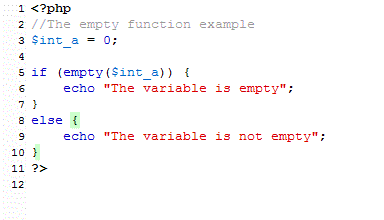 So, it still returned as true or the integer variable is taken as empty. If the variable contains 1 or more value it will not be taken as empty, in the case of a string or float variable.

Also note, even if a string variable contains the 0 value i.e. str=”0”, it will still be taken as empty.

An empty example with array element

In this example an associative array of three elements is used. The first and third elements of the array contain value other than zero. While the second element is assigned the 0 value. See the output yourself by clicking the link or image below:

You see, the foreach loop is used to loop through the array elements. Inside the foreach, the if statement is also used and a message is displayed if the current array element is empty or not.

The second element is shown as empty while other two as non-empty.

Why we use the empty function?

Sometimes, you need to check if a variable contains a value or not before proceeding to some action.

For example, you are taking the input values from the user in a web form. A few fields like Name, email, address are mandatory in the form. While you can check it at the client side by using the JavaScript, however, sometimes it may be disabled.

In that case, you may check the variable values by using the empty function to ensure that a user has entered some values or otherwise redirect the user back to the form page rather than proceeding to save the information in the database.

How to use PHP empty function

Using the empty function is quite simple. You simply need to provide a variable name to check if it contains a value or is it is empty.

This is what the empty function takes as ‘empty’:

Then this will be considered as empty.

A few of the examples are shown in the above section.