The values for the right table are filled with “NULL” values that are unmatched. The examples after the syntax make it clearer that how MySQL LEFT JOIN works.

This is how the MySQL LEFT JOIN is used:

An example of MySQL LEFT JOIN

The common key in these two tables is employee id that is used as follows:

Note: You may simply use LEFT JOIN or LEFT OUTER JOIN as well.

The example of using table alias

As shown in the syntax of LEFT JOIN, you may also use table name alias instead of full names as specifying the common keys. The example below returns the same result as in the above example, except I used the table alias:

An example of using GROUP BY clause with LEFT JOIN

The example below uses the MySQL GROUP BY clause with the LEFT JOIN. Again, employees and orders tables are used and the query returns total paid salaries of those employees whose records exist in orders table: 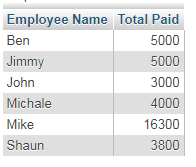 Similarly, you may add the HAVING clause for filtering the rows returned with GROUP BY clause. See the combination of LEFT JOIN, GROUP BY and HAVING clauses:

You can see in the above graphic that the records of those employees are returned whose aggregated salary is greater than 4000.

The following query uses multiple LEFT JOINs that combines the data of three tables. In addition to the above two tables, the products table is also included in the query as shown below: