The ng-class directive in Angular

For dynamically adding or removing the CSS classes from the HTML elements like div, span, input fields etc. you may use the ng-class directive.

You may specify the CSS classes in different ways in the value of ng-class directive.

Following are the ways:

See the following section for using the ng-class Angular directive in different ways.

A demo of ng-class with a div and textbox

In this example, a number of CSS classes are created in the <style> section. A textbox is given where you may enter any class name from the given classes. You can see the available class names in the textbox as the demo page loads. The entered class will apply to the text given in the div element by using ng-class directive.

The CSS used in example:

An example of ng-class with array

In this example, an array of CSS class names is created in the controller part. The class names are assigned to HTML select dropdown as the web page loads. As you select a class name, the class is applied to the div element. Have a look by clicking the link or image below:

Using a Boolean expression in ng-class with HTML table

In this example, the Boolean expression is used in the ng-class directive. The ng-class is used in the table tag of HTML. A checkbox is given which value can be true or false. If this is false (unchecked), the redclass will be applied to the table. If true, the greenclass will apply. Initially, the table is given a few Bootstrap built-in classes: 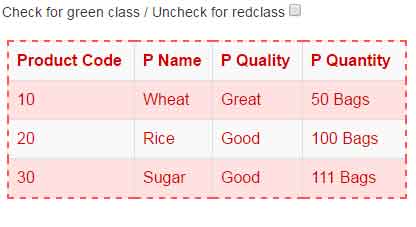 A demo of using the ternary operator or “if…else”

The default class is yellowclass which is applied as the demo page loads, have a look: 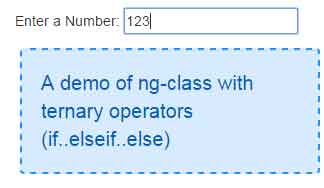 Following is the CSS used that will apply conditionally:

You may use as many conditions as you need by using ternary operators. Also, you may define the default class. If you want to use multiple classes then separate those by space.