The for loop in JavaScript

The for loop is used to execute the given code to the given number of times in JavaScript.

This is how the for loop is used, generally, in JavaScript:

See the following examples of using the JavaScript for loop where I will start with a simple example to using in JS arrays with its property. 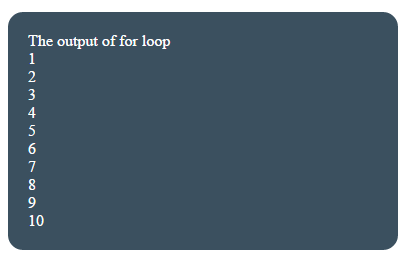 In the <script> section of code, just above the </body> tag, this is how the for loop is used:

Inside the curly braces, the value of ‘x’ for each iteration is gathered till it reaches 11 where condition becomes false.

As the condition becomes false, the control will be shifted outside of the for loop. The next line outside of for loop will display the gathered values into a <div> tag of HTML.

An example with decrement operator

In this example, instead of using an increment operator, a decrement operator is used. The initial value of the variable is set as 10 and it will decrease with each iteration by one. 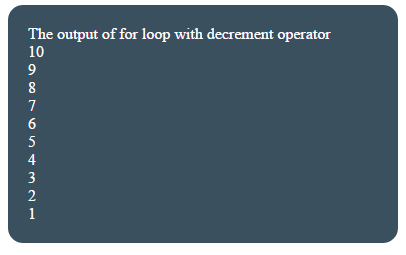 This is how the for loop is used in that example:

An example to increase by more than one

In above two examples, the increment or decrement operator was given the value of 1 by using the ++ or –. You may specify higher or lower numbers. See the following example, where I updated the counter as the last line in the for loop rather using in the parenthesis: 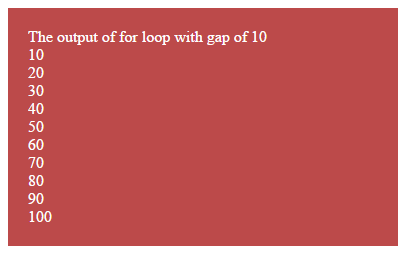 You can see, the value of the variable is incremented by ten in each iteration. This code is used:

Similarly, you may decrease the value in each iteration.

Using for loop in arrays of JavaScript

In the first example, a numeric array of five elements is created. After that, a JavaScript for loop is used to iterate through the array element where the length property of the array is used. See the code and output online: 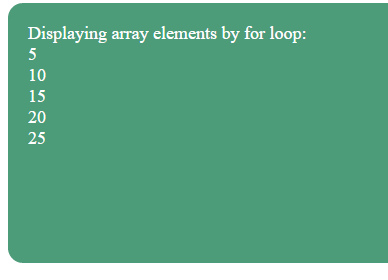 In the for loop, the initialization and increment operator are the same as used in the first example. However, to specify the condition, the length property of arrays is used. The length property returns the total number of elements in an array.

So the condition becomes; execute the for loop to the total number of elements in the given array. This is how the for loop is used in example:

The variable is used to specify the current element and assign its value to another variable, displayArray. The displayArray variable collects the element values and finally this line displays the array elements in a div:

An example of using the string array in for loop

This time, an array of strings is created and its elements are displayed by using a for loop. Although, there is no difference in creating a numeric or string array. Also, the way a for loop is used is the same. 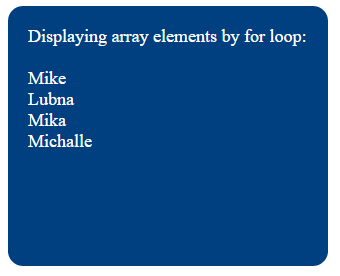 This is how the array is created and displayed by using the for loop:

An example of using variables as range in for loop

In above example, I used fixed numbers to execute the for loop by specifying a number in the condition. For example:

You may use a variable there as well to run the for loop if you are not sure how many times a for loop should execute. For example, a selection from the user in a web form.

First have a look at the demo and then I will explain how for loop is used in that example:

At the onChange event of HTML select dropdown, a JS function is called. Inside the function, the selected number is used in the for loop to creating array elements.

After creating the array, another for loop is used to display the elements: