The trim() method of Java can be used for removing the whitespaces from left and right of the given string.

Following is the general syntax for using the trim method: 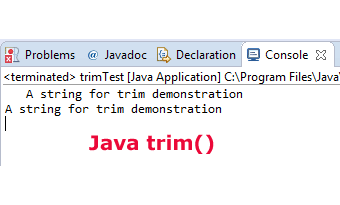 You can see, the leading and trailing spaces are removed from the specified string.

Yes, the trim() function will also remove spaces created due to \t i.e. tab. See the following example where a string is created with \t towards both sides. Again, for clarification, the original string is displayed along with the copy returned after using the trim():

What about trimming only left or right spaces?

Well, as we have seen in the definition and examples, the trim method can be used for removing the leading and trailing spaces. However, in certain scenarios, you may require omitting whitespaces from one side – left or right of the string.

There is no specific method for that like ltrim to remove leading spaces or rtrim for removing the trailing space. In other programming languages like Python, you may use the lstrip or rstrip methods for that. So, how to do this in Java?

You may use different ways and one of the ways is using the replaceAll method as shown in the example below:

You can see four strings as output: