The modal and minimize/maximize options

Video of this Tutorial

Let me show you adding minimize and maximize options in the modal of Bootstrap in the following demos.

A demo of modal with minimize and maximize options

After that, you define the header and body content etc. As you click the red button in the demo page, the modal will appear with minimize option, have a look:

You can see the cross button for closing the modal and minimize button initially. If you click on it, the modal will minimize to the left bottom of the screen with maximize option.

Follow these steps for setting up this modal dialog.

Also include the JS libraries of Bootstrap and jQuery.

Use the markup for creating the modal. The close, maximize and minimize options are set there while its functionality is done in the jQuery code which is placed just above the </body> tag.

Have a look at the <script> and complete code in the demo page.

Customizing the modal and header in minimized form demo

In order to customize the modal as per your choice or need, you require dealing with a few CSS classes.

Pick and place those into your own CSS file or in the <style> section. I have written this in detail with demos in the Bootstrap modal tutorial. In this demo, I am just showing how you may customize the modal with maximize and minimize options.

The customized header is also visible as you minimize the modal. Have a look at demo and complete code online: 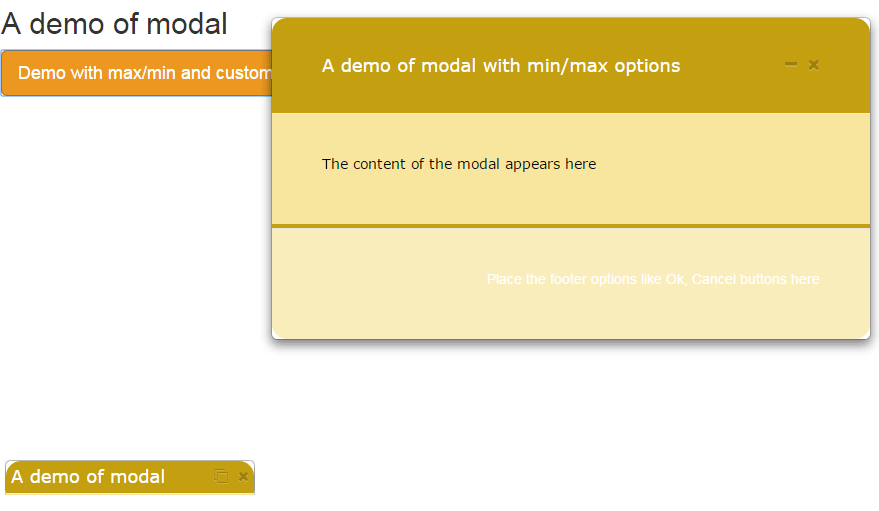 You can see three additional classes in the <style> section, i.e. modal-header, modal-body, and modal-footer. The style of modal-header is also visible as you minimize the modal dialog.

In all above demos, the modal window closed only when you clicked the cross button. In this example, the modal will close as you click anywhere outside the modal. Also, I added additional content i.e. buttons in the footer that will also close the modal dialog.

You may get the complete code, including CSS, jQuery, and markup from the demo page. One thing to be noted, if you are picking the specific items of this plug-in, the last <div>:

deals with minimize position so must take it and its related CSS.