The issue of string to integer or float (number) conversion is quite common as doing programming in different programming languages and so in Java. For example, as taking the user input for numbers, the default is taken as strings.

In order to perform mathematical operations or use string numeric characters as numbers in your program, you have to convert the strings into numbers. However, that string must be the int representation that needs to be parsed.

The parseInt method can also be used as follows:

The second argument specifies the radix. In this way, the given string is parsed as a signed integer in the radix.

An example of parseInt method

The following example shows how to use the parseInt method for converting a string to an int. 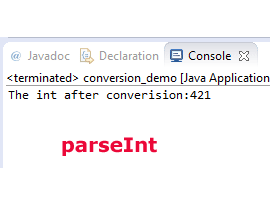 You may also use the parseLong method if the string is a large number that is beyond the range of int type.

What if a string is float number?

If a Java string to be converted into numbers is a float (e.g. 123.456) then you may use parseFloat and for larger number parseDouble method. See the following demo where not only numbers are converted to float but also used for multiplication with another number:

What if a string contains non-numeric?

As mentioned earlier, the parseInt Java method throws an error if the given string contains non-numeric number or characters other than numbers and (-) sign. This is shown in the example below:

You see, even the given string contains number; however, it also contains other characters. So an error is thrown which is NumberFormatException.

You may also use valueOf method for converting the string into integer. The valueOf is the method of Integer class.

This is how the valueOf method can be used with variations:

See the following examples of using the valueOf method.

The example of converting string to integer by valueOf

For this example, two Integer objects are created and assigned the string values; one with negative and other with a positive number in the string:

The string contains other characters than number example

This string object is passed to the valueOf method. Now, I “accidentally” entered a non-numeric character to convert this into Integer. See what it outputs:

As mentioned earlier, the valueOf Java method throws an exception if a non-numeric character other than (-) is assigned in the string argument.

Converting string to float and double by valueOf

You may use the following syntax for returning the float and double by using the valueOf method:

See a demonstration below:


The output as I entered the values for float and double: 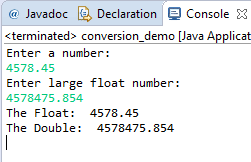 You can see, both string entries are converted to float and double, respectively.

Both parseInt and valueOf methods can be used for converting int to strings in Java programs. The parseInt method returns primitive int type while valueOf returns Integer object.