How to create links in HTML

The <a> tag, that stands for the “anchor” is used to create the hyperlinks in HTML documents.

This is how a simple link can be created by using the anchor tag:

You may use relative or absolute paths in the href attribute, for example:

In the following section, I will explain with demos that how you may create links in HTML with different attributes and style with CSS. The demos can be seen online while code is also available to copy that you may execute in your local system.

A simple example of creating a link

In this example, a simple link with only href attribute and anchor text is created. See the demo online:

This is how link tag is used in the example:

This link will open in the same window or tab where it is clicked.

Opening link in new window or tab by target attribute

By using the target attribute and using the _blank value, the link will be opened in a new tab or window. See the example online:

This is how the link is created with _blank value:

The other values can be used are:

Let me move ahead by using the power of CSS to style simple looking links of HTML. The first demo is the links in a menu. The menu is created by using a <div>, <ul>, <li> and <a> tags.

The CSS class for the hyperlinks is created in the <style> section. See the demo online which is followed by a little description. 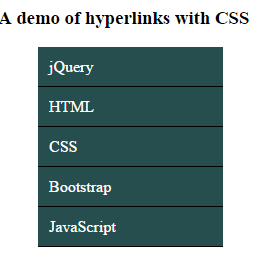 You can see the CSS properties for the <a> tag is set in a class:

In this example, the menu remains the same as mouse hovers over the link. To add hovering effect with CSS, see the following example.

The hover state occurs as mouse is brought over a link. You may specify different properties like text, background and many others at hover state purely by using CSS.

See this example where I added hover effect in the above menu example: 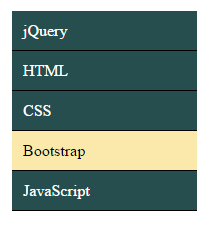 You see, the background-color and text color are changed as you bring mouse over any menu item. The following code is added in the <style> section:

That is, I specified the hover selector, a:hover to get that.

Using title attribute in a link

The title attribute of the <a> HTML tag is generally used to describe a little about the link, apart from the hyper text. The title appears as a tooltip as you bring mouse over a link (by default).

By using specific plug-ins, the look of these tooltips can be enhanced incredibly. Let me first show you simply using the title attribute in above example – where I created a menu. 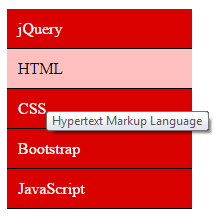 You see, all links are given the title attribute:

Bring the mouse over any link to display the title as tooltip.

See the following example where I used a jQuery plug-in for changing the default style of title attribute of <a> tag. Open the demo page and bring the mouse over any link to display a tooltip. I will explain this after that: 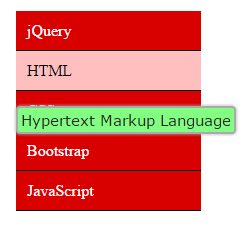 You can see, the same menu is used to display link. Nothing is changed in the markup part including titles.

To create these tooltips, you have to include the jQuery and  jQuery-ui libraries. Besides, for making tooltips appear smoothly, you can use the jquery-ui.css. All these files are included in the <head> part of demo page:

The next step is to initiate the plug-in in the <script> section:

Create/modify the class for displaying the tooltips as you want.

You should use this type of tooltip only if already using jQuery / jQuery-ui in your project or maybe try to find out some light-weight and link title specific plug-in.

Using the rel attribute in links of HTML

Another important <a> tag attribute is “rel” that stands for relevance. This attribute is specific to search engines to tell them the relevance of that link to the current web page.

The default value of rel = follow. That means the target link should get some link juice or power for SEO (in eyes of Google or may be other search engines)

The other value is “nofollow” which means you are not offering any link juice or endorsing the target link.

There are other values as well that you may use in the “rel” attribute:

Using image as link rather text

As mentioned earlier, you may also images that are linked to the target pages. To make an image a link, simply use the <img> tag in place of anchor text. See the following demo: 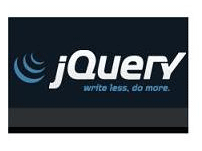 This is how the image link was created in the above example: