The img src stands for image source, which is used to specify the source of an image in the HTML <img> tag.

For example, this is how the image path is set along with title and alt attributes in img tag:


Two options to specify a source

You may use absolute or relative paths to specify the source of the image in HTML img src attribute.

In this option, the complete URL of the image is specified in the src attribute of HTML img tag. For example: 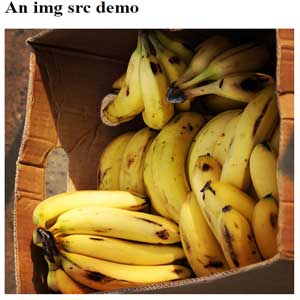 You may also specify the URL of the image without “http”.

This will be useful if the server is changed from HTTP to HTTPs in the future, for example. This will work in both cases.

Where should I use Absolute path in img src?

Although, absolute options will also work for the same server, however, recommended way is to use the relative path in case images are existing at the same server where your website is hosted.

In this option, you will specify image source based at the current directory. An example of relative path is:

If you are working in a source file e.g. index.html and use above line of code, it means:

See another possibility to specify path: 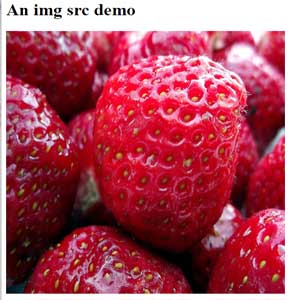 If image is placed at the same directory where source file is:

What if the image does not load? The alt attribute

There may be a few reasons that images does not load, for example:

In any case, where an image is unable to download at user’s computer the alt attribute text will be shown. The alt means alternate which is specified in the <img> HTML tag. For example:

So if the path is incorrect or image is not loaded for any reason, the text “Banana is good in taste” will be shown in place of the image, as shown in the demo.

The HTML alt attribute is recommended to use for images generally. This will benefit as far as SEO is concerned. As such, search engines are unable to read the text inside the images so the only way you may tell the purpose of images is by “alt” or “title” tags.

The title tag of the <img> tag (and others) can be used to display the tooltips. By default, tooltips use default style which is small in size and small text.

By using tooltip with CSS, you may style it quite beautifully.

In this demo, I will show you tooltip by using the Bootstrap component. For that, I simply included the Bootstrap libraries and jQuery in the head section. 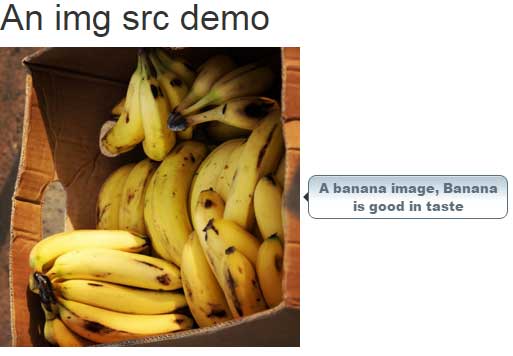 The tooltip is called in the <head> section by using jQuery (see script section). The style contains the look and feel of the tooltip.

For more on Bootstrap Tooltips, go to its detailed guide.

Out of the two options to specify the path in img src tag of HTML, you should use relative if images are located at your own hosting.

If you are referring images from other servers then use absolute URLs in the src attribute.

You should also consider using absolute URLs if you are using high-quality images and your hosting package offers limited bandwidth consumption.

There are third party image hosting solutions where you may host images while the bandwidth cost is incurred by that server.