In the SUMIF function tutorial, we learned how to SUM a range or cells by single criteria. The Excel SUMIFS function is used if you need to apply multiple criteria to get the sum of range.

An example of SUMIFS function

To explain the SUMIFS function, consider we have a table storing Items Purchased, Quantity and their Prices. (See the graphic with example data and formula below)

Now we want to calculate the sum of cells that contain Product Name “Milk” and which Total Price is greater than 4. So, we have two conditions to apply and this can be done by using SUMIFS as follows.

The excel sheet with data and result: 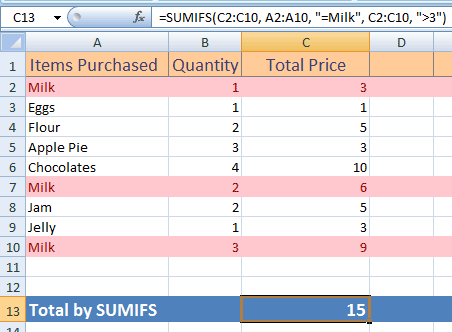 You can see, the highlighted rows show the occurrences of Milk three times. However, the SUMIFS returned the sum of only two cells i.e. 15. The cell with value 3 is omitted as it failed for one criterion.

On the basis of above example, let me explain the syntax/arguments of the SUMIFS function:

Be careful, as you are comparing SUMIF and SUMIFS function. In SUMIF function, the sum_range is given as the third optional argument while the single criterion is given as the second argument. See an example below.

The SUMIF function for a quick reminder

The following example shows using the SUMIF function so you have quick idea how different is the syntax or order of arguments in both function; to avoid mixing up both.

The SUMIF allows getting the sum based on single criteria as shown in the same excel table that I used in above example: 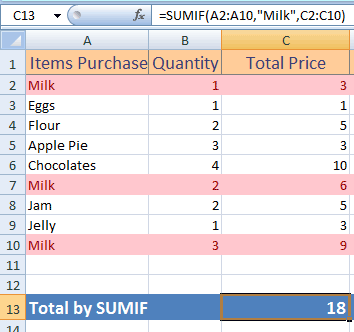 Using a wildcard in SUMIFS with three criteria example 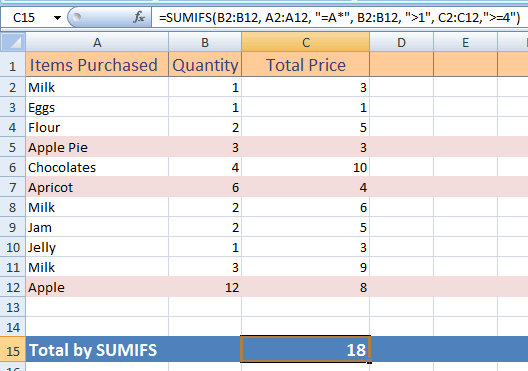