jQuery $.live and $.on methods

In this tutorial, I will explain how $.on method has replaced the deprecated jQuery live method from the version 1.7 of jQuery.

Replacement of jQuery $.live by $.on method

This is how $.live method was used to attach event handlers to the current or future specified elements:

Where div is the specified element where you can use other selector or elements like a paragraph, span, a CSS class/id etc. You could use multiple events in the $.live method as well, for example:

This is how you can attach single or multiple events by $.on method to get the same functionality as in $.live method, first attaching a single event:

To attach a handler to the multiple events, just separate it by spaces:

See the following examples of $.live and getting the same result done by using the $.on jQuery method.

An example of jQuery live method with a div element

In this example, a div element is created with a basic style. As you click the div element or take the mouse out of div, an alert will be shown. See the demo online:

This is how $.live method is used in the demo:

At the click and mouseleave events of the div element, an alert is triggered by using the $.live method. Also, notice that in the <head> section, the jQuery library version is 1.7.

Same example as above by using the $.on method of jQuery

Now, the same output as in above example, trigger an alert at the click and mouseleave events of the div by using the $.on method.

See the demo and code by clicking the link below:

You can see the same result on the demo page. This is how the $.on method is used:

An example of $.live method with current and future elements

As mentioned in the definition of live jQuery method, you could attach handlers to the current as well as future elements in the $.live method. For example, your web page is creating new div or table rows without reloading the web page and you want to have new elements same functionality as the current elements.

See an example online where a button is given along with a div element as web page loads. 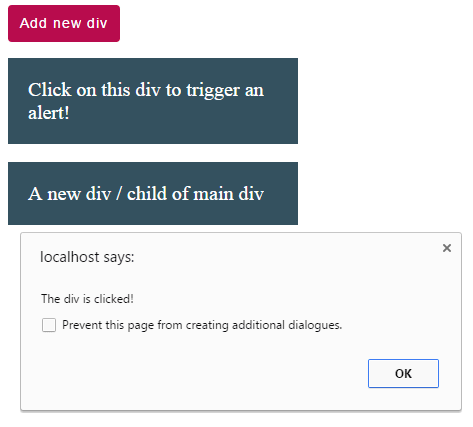 You can see, as you click on the child div elements created by clicking the button, it triggered the same alert as the main div. This is how $.live method is used in that example:

Now see the same result by using the $.on method while using the latest jQuery library.

A demo of current and future elements with $.on method

The same example with the similar result except this time $.on method is used.

You can see, as you click on the child div elements created by clicking the button, it triggered the same alert as the main div. This is how $.on method is used in that example:

To learn more about $.on method of jQuery, a complete tutorial is written here.