A message box or dialog box is used to interact with the users of your application. The purpose of using a message box may include notifying about a particular action e.g. success message after entering a record. Similarly, an error message if an operation was unsuccessful. In both cases, you may display the “OK” button in the message box with the message.

In other cases, you may display a message box for the user confirmation before performing a critical action e.g. deleting a record permanently. In that case, a Yes/No button in the dialog box makes sense.

In this tutorials, I will show you how to create various types of C# message box with code.

How to make message box work in Visual Studio?

If you are working in Visual Studio then you have to include the System.Windows.Forms by following this:

The example of creating a simple message box

After taking the above steps, you need including the System.Windows.Forms namespace as used in the code below.

You may provide a message to be displayed and the title of the dialog box by using the MessageBox class’s show method. The following example simply displays a box with the OK button: 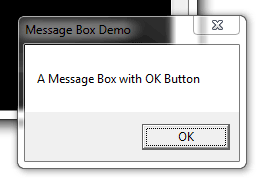 An example of Yes/No message box

The Yes/No dialog box can be useful for asking users to choose an option between the two. For example, “Are you sure you want to delete this record?” Similarly, “Do you want to really quit?” and so on.

The example below shows a Yes/No message box: 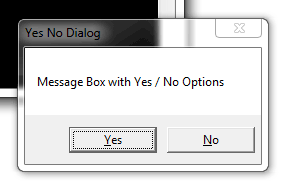 Adding Cancel button in above dialog

You may use the YesNoCancel Enum value for creating a dialog with the third button i.e. Cancel in addition to the above two buttons. The code below shows how with the output:

By using the MessageBoxIcon Enum, you may specify an icon to be displayed with the message in the dialog box. A number of values for various types of icons can be used. For example:

As you execute this code, four dialog boxes should display with respective icons and messages.

The message box with OK button only may be used for information purpose to the user, without performing any action. However, in the case of boxes with OK, Cancel, Yes and No, Retry buttons, you may require performing some action based on the user’s selection.

So, how to catch which button is pressed by the user?

For that, you may use a variable that catches the returned value. Then it can be used in an if statement and you may perform the desired action.

To demonstrate that, the following program displays a message box with Yes/No/Cancel buttons. As you click any button, another message box with “OK” button is displayed with its own message for each button: 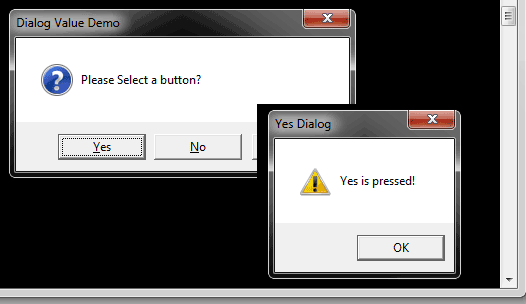