By using the modal component of Bootstrap framework, you may create the modal dialog in your web pages. All it requires is to include the Bootstrap CSS and JS files, jQuery library and using the modal related classes in the markup section.

I have written a guide for creating modal dialogs by using Bootstrap here.

In this tutorial, I am using a jQuery plug-in that makes it even easier for creating the modal in Bootstrap. Not only it will be easier but allows creating Bootstrap modals with plenty of options. See the section below with code, live demos and how to set up this plug-in to be used on your website.

A simple example of creating modal

First, let me start with a basic demo of creating a modal window by using bootstrap3-dialog plug-in. Click on the “Launch modal” button for displaying the dialog in the demo page.

The markup for the example:

See the complete code including dependent JS/CSS files in the demo page.

A demo of manipulating text in dialog box

That way, you may display different messages in a Bootstrap dialog on the fly upon user’s action. Have a look:

The Script for this example:

See the complete code on the demo page.

A demo of using multiple buttons

In this example, multiple buttons are used in the modal dialog. You may perform various actions like closing the dialog, triggering an alert etc. In above example, I also showed how the message is displayed with respect to each button.

You can see, the button styles are set by using the cssClass class while you may also display an icon with button caption by using the icon option.

A demo of displaying multiple modals

You may also display multiple modal dialogs by using this cool plug-in. See this demo where four dialogs are displayed. Close first to display the second and so on. 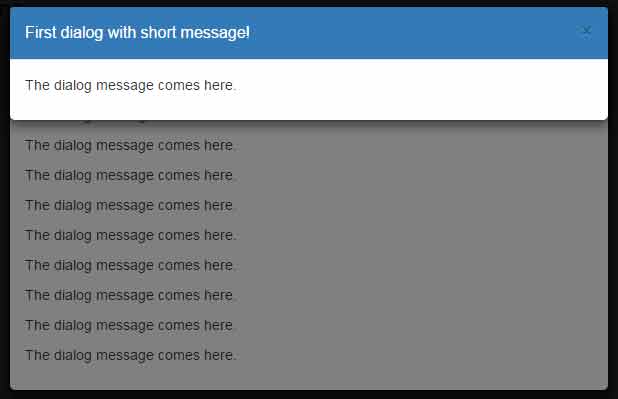 Using different colors in title bar of the dialog demo

Have a look at this demo where multiple dialogs are displayed with different title bar color. Press the close or “Okay, Next” button to display the next dialog until all are done:

On the other hand, these colors also act as message types in a dialog. For example, the red represents the danger or critical message. The green for success, orange for warning, and light blue for the information etc.

How to set up this plug-in to be used on your website?

You may download the plug-in from the Github website here. There, you may see the demo page where many other examples are included with live demos.

All required libraries are fetched from the CDNs that include Bootstrap, jQuery and plug-in files that you can see in the demo pages’ <head> section.