In this tutorial, I am going to use a jQuery plug-in with Bootstrap framework for creating the sliding form that you may use for feedback or any other purpose like subscriptions etc.

The Video of this Tutorial

The plug-in name is bootstrap-feedback-form. You need to include the JS and CSS files of this plug-in in your web pages.

The sliding form can be really useful for increasing customer/visitor’s feedback or getting subscriptions etc. as such the caption goes across the website as user scrolls down or up. Have a look at the demos for using this Bootstrap form sliding from the left towards right along with code and setting up guide.

Click the demo link or image below for the sliding form demo. For setting up this form, you need to include the jQuery library along with Bootstrap and plug-in JS files. In the <head> section, include the CSS files of Bootstrap and bootstrap-feedback-form plug-in CSS file. 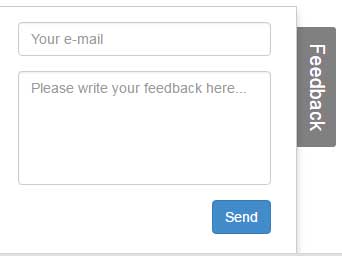 First of all, include the CSS of plug-in and Bootstrap:

The feedback.css specifies the position of caption like “Feedback” and form properties.

Above the </body> tag, place the JS files:

The markup section contains the form tag and required controls like email and message in the demo. See the complete code in the demo page.

You may modify the markup and CSS for creating some other form as per requirement of the website. In this demo, a contact us form is created with more fields like Name, Email, Subject and Message while CSS properties in the feedback.css file are changed accordingly to accommodate more fields. Have a look:

The following markup is used in above example for contact us sliding form:

For that, I also copied the plug-in CSS file and renamed it to contactus.css and modified a few properties in #feedback-form.

A Bootstrap sliding side menu with jQuery: 2 demos