The datepicker in Bootstrap

Unlike many other add-ons, the datetime picker is not provided in the Bootstrap framework. In order to use datepicker, you may use jQuery UI based datepicker widget, as such in your web projects based at Bootstrap, you generally have jQuery library included.

For Quick idea, Watch this Video

In that case, you only need to include the jQuery UI library that has datepicker component. This can be customized as per needs of your website. A guide to set this up is written here.

The other way is to use third party plug-ins that are based at Bootstrap framework. This tutorial is a step by step guide to set up Bootstrap datepicker.

The datepicker plug-in name is bootstrap-datepicker, which is a fork of Stefan Petre and is enhanced and maintained by semvar (source links are given at the bottom).

Before setting up this plug-in, have a look at a few demos online to see how it looks, stand-alone and in Bootstrap forms with other form controls.

In this demo, a datepicker Bootstrap is created with a textbox. As you click in the textbox or icon ahead of it, it will display the calendar to select the date. See the demo online by clicking the link or image below: 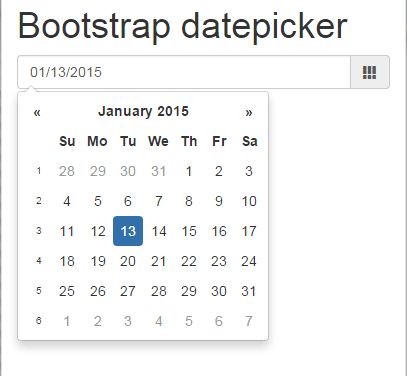 This demo shows how to give a user an option to select the date range. In that case, two text boxes are shown where a user can select the date from the calendar. See the demo online: 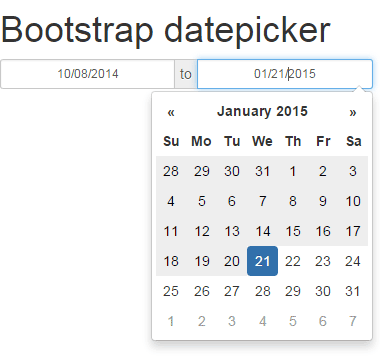 In this demo, a form is created in Bootstrap. It has different controls like textboxes, select dropdown, a button, checkbox and a datepicker, which is a textbox with datepicker. I will explain how this is integrated into form, in the step by step guide after this example. See the live demo of this calendar: 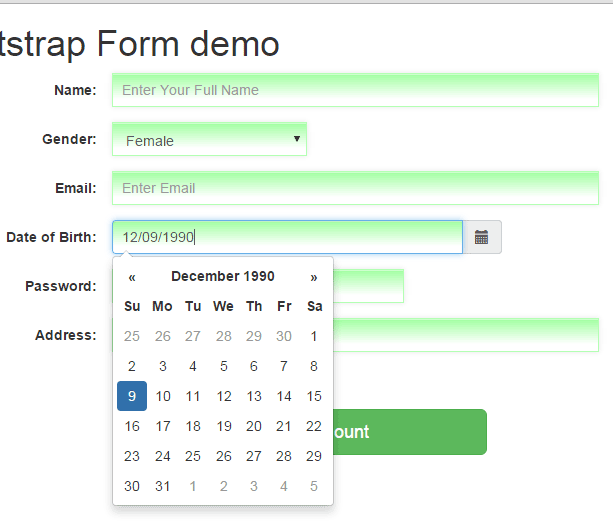 Steps to set up this Bootstrap-datepicker plug-in

In all above datepicker examples, I have used bootstrap-datepicker plug-in. As mentioned earlier, this is a third party plug-in that needs to be installed or set up in order to get it working.

Include the Bootstrap libraries of CSS and JavaScript.

The plug-in site says its requirement is Bootstrap 2.0.4+. I have tested it with the latest version as well, Bootstrap 3.3.5, and it is working there as well.

If you looked at the code section of above online demos, it has two additional files:

These are the required files that contain plug-in and style. Include these after the Bootstrap and jQuery libraries.

You may get these libraries here: CDN link or find it in GitHub site.

That’s it as far as including libraries are concerned to make it work.

See the <script> part in example codes to call the date picker as you click in the textbox or icon.

For example, this is what I used in the second and third examples:

You have to call datepicker by textbox ID, class, or name. Just replace it with the ID of your textbox that is associated with the calendar.

The markup or HTML to be used varies as per the need and functionality you want in the calendar. For example, in the first example, I simply used a textbox with icon and the markup is:

In the second example of date range datepicker:

In the form example, which also uses a custom class to style the form controls including calendar textbox, the markup used for datepicker:

In all above example, you might have noticed the datepicker or calendar is using the same style, which is the default. In professional websites, you may also need to change the look and feel of the date picker to match the theme of your website. The following section describes it, how!

A demo to change the default style of Bootstrap-datepicker

The style of date picker is set in the CSS file of the bootstrap-datepicker plug-in. This file is included in the head section:

In order to change the look of the calendar, you have to change the colors or other CSS in that file. You may either download this file, amend it as per need and host it at your own OR select the required CSS classes that need to be changed and override the default.

Following are a few datepicker styles by changing a few CSS properties mentioned below: 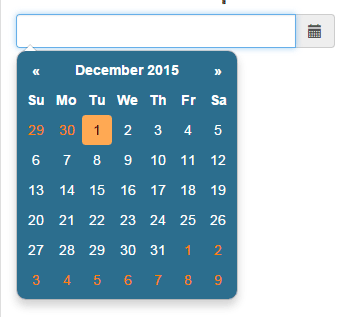 In that demo, a few classes from the bootstrap-datepicker3 are taken that affect the color of whole datepicker, the hover state of month/year bar, hover class for days as you bring the mouse over it and current day class.

For the demo, I have placed these classes in the head section after the bootstrap-datepicker3.min.css file.

Following classes are changed in that demo:

To change the background color and adding radius in the datepicker dropdown:

To change the color of days:

Hover state of days as you bring mouse over:

To change the current day

The header, where year and month are displayed

Another custom datepicker with CSS 3 properties

The following demo is another datepicker that is using the Bootstrap-datepicker plug-in with a few CSS3 properties. The classes are placed in the head section that overrides the default classes. 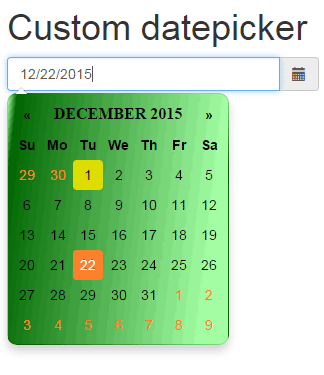 In this demo, I simply used a linear gradient background in the main datepicker-dropdown class.

Besides, to match the colors of days, active day, current day, and hover states, a few changes are made in above mentioned classes.

A datepicker Bootstrap with bordered days

In this example, bordered days are presented with linear-gradient along with changing the color scheme of the datepicker. 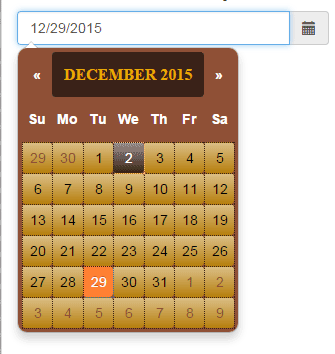 The following class is amended to get the bordered days which is also using gradient:

By using the border-radius property, you can change the look of days to round style as shown below: 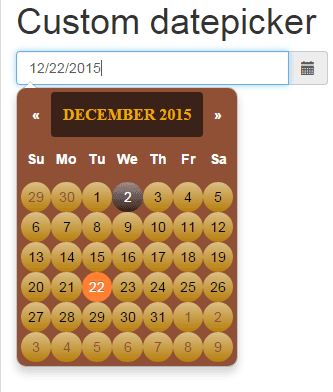 The only difference to above example is border-radius: 50%.

Using custom datepicker in a form

The following demo shows using the custom datepicker in a Bootstrap form. The form contains same controls as in the third example i.e. a sign-up form. See the demo online: 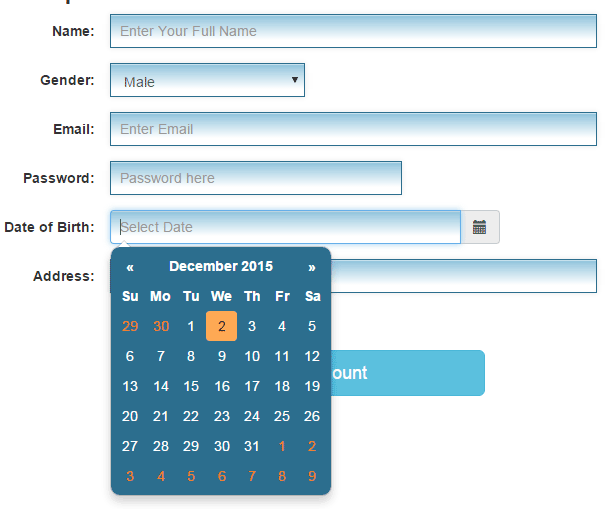 The style section contains the custom CSS class for the controls as well as selected classes of the datepicker’s CSS classes that override the default styles.

What about customizing range datepicker?

Similarly, if you need to modify the date range datepicker styles, it has a different set of classes in the same CSS file. Just go through it and you will find it easily with the range prefix. Copy those classes from that CSS file and bring it in the styles section of head tag OR use an external CSS file.

In any case, you must refer that style after including the bootstrap-datepicker3.min.css file. (or if you are using less or another format).

By using this link, you can set up the datepicker functionality by using an online wizard. It will automatically generate the code for the jQuery section (in the head) and markup that you can use in your website.

For example, the datepicker should be auto-close or not, as a user clicks on a day. Including keyboard navigation, setting date format, Calendar Weeks, and many other options can be set up by selecting or unselecting options.

Bootstrap datetimepicker: managing with date and time in Bootstrap

Setting up a Bootstrap Material date and time picker plug-in

A guide to use jQuery autocomplete with code and examples