The forEach function in AngularJS

The Angular forEach function can be used to perform some action for each item in a given object or array. The iterator function in forEach is invoked for each item of array or object.

This is almost similar to the foreach loop in other programming languages like JavaScript,  PHP etc. where foreach loop is used with arrays or other collections. In AngularJS, it is a little different, however, it iterates through each element of the given array or object.

Following is the way to use the forEach function of AngularJS:

Where the first parameter can be an object or an array. The second parameter is an iterator function that is invoked for each item in object or array.

See the examples in the following section for learning more about forEach Angular function.

A demo of using forEach with an array 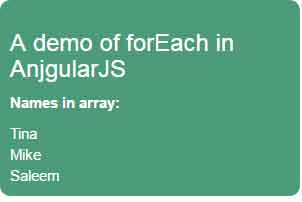 An example of forEach for displaying index and values 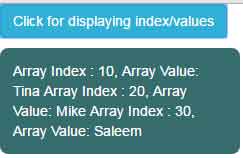 You can see in the controller section, an array with three elements is created. This is followed by using a forEach function where that array element is used along with its value and key. The values of index and values of elements are used in the next line for gathering the information of each element in the content variable.

In the markup section, a div is used where “content” is given that contains the string with key/value pairs of the array. On the click event of the button, the ng-click directive is used.