The Excel DATEDIF function takes the start date, end date, unit and calculates the difference in terms of days, months or years between these two dates. The unit specifies what you require; days, month, or years.

The general format of using the DATEDIF is:

I will explain the arguments, especially units after a few examples so you may understand easily.

An example of Excel DATEDIF for calculating number of days

Let us start with a simple example of using DATEDIF function to calculate the number of days between two dates. Suppose, we have a “Purchase Date” column and another is “Sale Date”. We want to see the difference in terms of days.

The following formula is used in B6 column to show the difference of days: 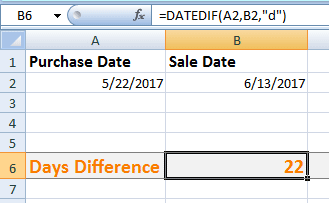 An example of getting Months difference between two dates

For this example, I have used dates as text strings in the DATEDIF function rather referring from the cell. Two dates are given while “M” value is used for the unit argument and see the result:

So, the number of Months between 1/13/2017 and 6/25/2017 is 5. Generally, the cell values are referenced in the formulas. The purpose of the example is just to show that the dates as text strings can also be used.

The example of calculating Years difference by DATEDIF

The DATEDIF Excel function can be used for calculating the age. In this example, we will calculate the number of years between two dates:

The following formula is used in cell B2:

For B column, the respective A column is used in the formula till B6. See the result: 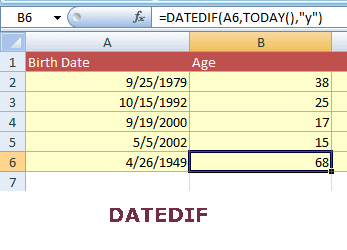 What if start date is greater than end date? 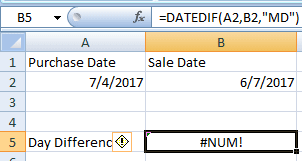 Exploring the type argument in DATEDIF

Until now, we used three different values in the DATEDIF function for unit argument. Following is the complete list of values for the unit:

Now let me show you a few examples of using the MD, YM and YD values and how these are useful.

The example of MD in DATEDIFF

To understand the difference between “D” and “MD” values, have a look at the following example. As such, the “MD” ignores the months and years in the given dates, I have used same dates for A2 and A3 columns. Also, same dates are used for B2 and B3 columns.

The D2 and D3 are assigned the DATEDIF formula; D2 with “D” unit while D3 with “MD” unit value. See the difference yourself:

You can see, similar dates are used and how ignoring months and year has resulted.

An example of YM unit value

See the dates and output with “M” and “YM” values:

The formula with YM:

You see, using YM resulted in 2 for the same dates because it ignored the days and years in dates.

The YD example in DATEDIF

The YD ignores the years in Start and end dates and gets the difference of days between two dates. For the demo, again I used dates with Year difference and compared “YD” with “D” to show how it works:

The DATEDIF formula with YD in D3 cell:

From the result, it is evident that the date is calculated by ignoring the year in the case of YD. Basically, dates are taken as follows:

A practical example of YM and MD in DATEDIF

You may wonder what can be the usage of YM and MD unit values? Let me show this by a practical example by extending the above Age example that was based on Birth Date and TODAY() date.

It calculated the age and displayed the years only. What if you want to calculate the age that includes Year, Months and Days? This is where you may apply the YM and MD unit values as shown in the formula and resultant sheet:

The formula used in C2 cell:

The B column displayed the age in years only (as in the previous example) whereas C column calculated the age in Year, Months and days.