In Java, you may use a number of ways to convert numbers (an int, float, double etc.) to string. Following methods can be used for conversion:

The preferred and general ways for conversion in Java:

Other ways of converting numbers to string:

Each of these ways is explained below with examples for converting numbers (int or float and double) to string.

The toString() method of Integer class can be used for converting a primitive int or Integer object into a string. This is how you may use this method:

For int to string:

For converting integer object to the string:

See the following code for using toString in both ways:


The output of above code is: 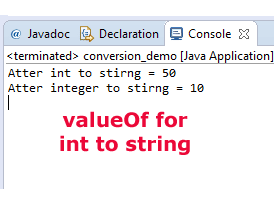 You saw, an int and the other Integer type variables declared. Those are assigned to the string variables after converting to strings by using the valueOf method.

Converting float and double to string by toString method

Similarly, you may use the toString method of the Float class for converting a primitive float or object float to string.

See the following example where a float (primitive) and Float object are changed to string by using the valueOf method:

The Double class also has toString() method that can be used for converting the double (primitive type) and Double objects into the string. See a demonstration below:

The output of above example is:

See the following example where all these data types are used for converting into strings: 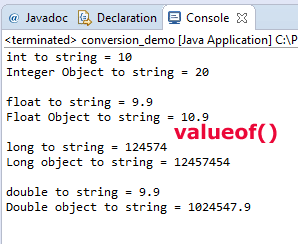 An example of concatenation operator (+) for conversion

The plus sign (+) is a string concatenation operator and that is also used for conversion of objects to strings. Java provides special support for this operator.

You may use the + operator for converting integers or other numbers to strings as well. This is the simplest way of accomplishing this task.

See the following example where a string is created based on values of an int, float and a double variable by using the + operator:

In above example, we used the primitive types for conversion. Similarly, you may use objects for converting into the string as using the + operator. This is shown in the demo below. There, I created three object variables:

You may also use String.format() method for the number conversions into string. Basically, String.format is bigger than that, but for our topic of int to string conversion, we may use this method as well.

See a demonstration below where not only int is converted but other data types as well by using format() method of String.

You can see, float and double with different precision also converted to strings.

Well, the usage of these classes for converting int or other types to strings can be useful if you are working with mutable strings. The StringBuffer and StringBuilder classes allow creating a string that can be modified, since; the String class’s strings are immutable in Java.

As for our topic for conversion into strings, if you simply change the object in above example from StringBuffer to StringBuilder, it will produce the same result. See the code and output below:

I only changed the variable names and values.