For getting the count of numbers, dates, text, empty or non-blank cells,  you may use various built-in functions in Excel.

Depending on the requirement, you may choose which one to use; for example, if you require the count of cells that contain numbers only, you may use the Excel COUNT function.

To get the count of all cells with numbers, text, dates etc except the blank cells, use the COUNTA function.

To get the count of blank or empty cells, use the COUNTBLANK function.

In the following section, I will show you Count Formulas in Excel with data in spreadsheets. You may copy any formula in your sheet to see how it works.

Get the count of numeric cells by COUNT function

Let us start with a simple example of counting the number of cells that contain numbers only. For that, I have filled cells from A2 to A10 by numbers, text, and blank cells. See what we get by COUNT function: 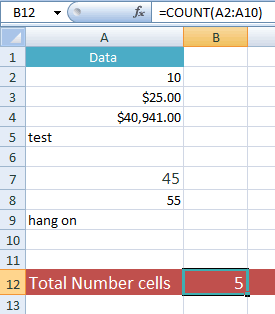 You can see, the COUNT function only returned the count for cells containing numbers. The blank and text cells are ignored while numbers with currency format are also included.

What if cells also contain dates?

The COUNT function also reruns the cells that contain dates. To demonstrate that, I extended the above range to B10 cell and added two numbers and two dates in B cells. So, the COUNT formula is:

See the sheet figure with formula and result: 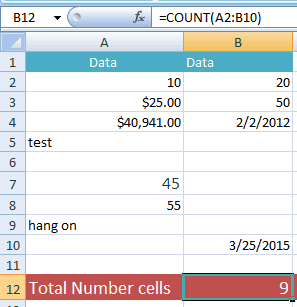 Two things are further used in this formula. The first is using multiple ranges i.e. A2:A10 and C4:C8. The second thing tested whether COUNT function returns the text with number e.g. “6test”. See the formula and output: 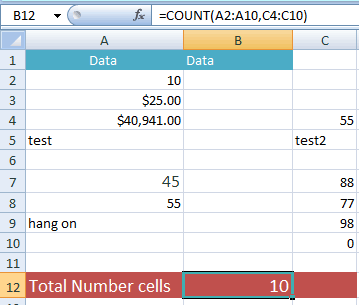 You saw, the COUNT did not return “2test” occurrence.

You may provide up to 255 ranges, cell references or items that you want to get the count.

If you require getting the count of the number of cells based on single criteria then use the COUNTIF function. If you separate two words: “COUNT” “IF”, it makes the purpose clear.

For example, COUNT the cells from A2:D1000 IF that contains the word “Microsoft”. Similarly, return the number of cells which date is less than or equal to 10/10/2010 and so on.

=COUNTIF(Where to search, What to search)

You may provide a range of cells, array, names range etc as the first argument.

In “What to search” argument, you will specify e.g.

The next section shows a few examples of using the Excel COUNTIF function.

Getting the count of matched text

In this example, we will get the count of “Apple” in our example sheet. The column A cells contain the Fruits and Vegetable names. In the COUNTIF function, I specified the Apple as follows: 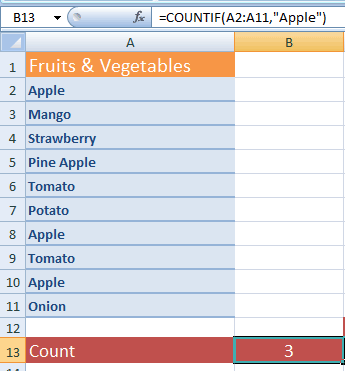 You can see the text Apple occurred three times in the given range.

Using the ‘*’ wildcard in COUNTIF function

You may also use the wildcards (* and ?) in the COUNTIF function. The ‘*’ is used for any sequence of characters while ‘?’ mark for the single character.

In the following example, I used the “to*” in the COUNTIF for the same sheet as used in above example and see the formula and result: 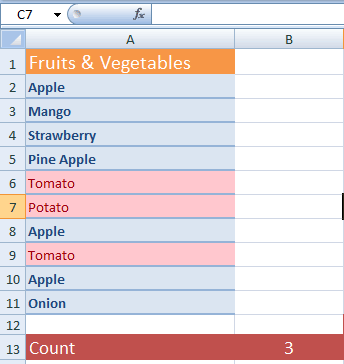 You saw the occurrences of Tomato (twice) and Potato (once) is returned as 3.

Using “>=” in COUNTIF for number count

For this example, I will use the single criteria for counting the cells containing the number of sales greater than or equal to 100 in the COUNTIF function.

For this example, the Excel sheet contains month names in B cells and number of sales in C cells. Following COUNTIF formula is used: 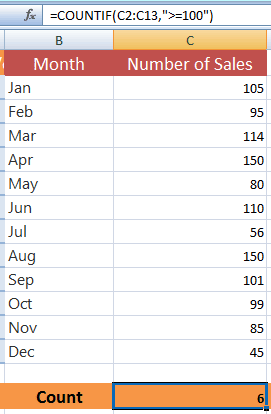 If you count the number of sales greater than or equal to 100, it is 6 that COUNTIF returned.

Now, we will get the count of Number of Sales less than 100 by using COUNTIF function. The following formula is used: 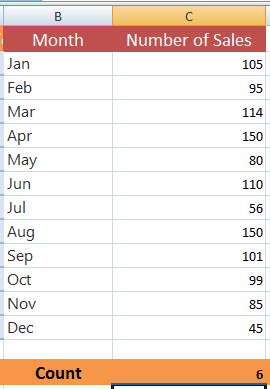 The count is again 6.

An example of Not equal to operator “<>”

For this example, I used the Not Equal to operator which is “<>”. The criterion set in the COUNTIF is to return the number of sales not equal to 150 i.e. 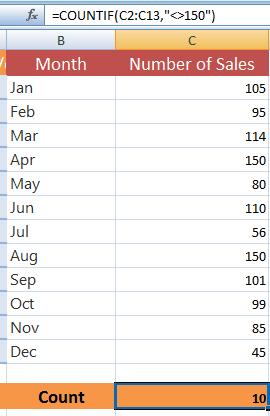 If you look at the data in the Excel sheet, it contains 150 twice. So, the COUNTIF omitted these and returned 10 counts.

Getting count of multiple ranges by COUNTIF

In this example, we will get the count of two different ranges by using COUNTIF function twice and adding the returned result.

For that, I have added another column in above sheet i.e. Amount. By using the COUNTIF function, we will get the count of (number of sales more than 100) + (Sale amount greater than or equal to $15000). See how this is translated into COUNTIF: 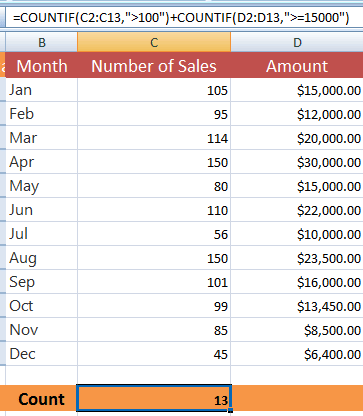 Note: Please do not mix it with using multiple conditions. The COUNTIF returned results separately and its result is summed. If we used minus operator then result would have been -1 i.e.

You may use more than two COUNTIF formulas as well. The function of using multiple conditions/criteria is COUNTIFS that is coming up in next sections.

The Example of using COUNTIF with dates

Just like the numbers, you may also write a criterion for date columns to get the count. For example, get the count of employees who joined after 3rd Jan 2012.

To demonstrate the usage of dates in COUNTIF function, I am using an Excel sheet containing fictitious records of employee names and their joining date. A named range is created which is referred to the COUNTIF function. 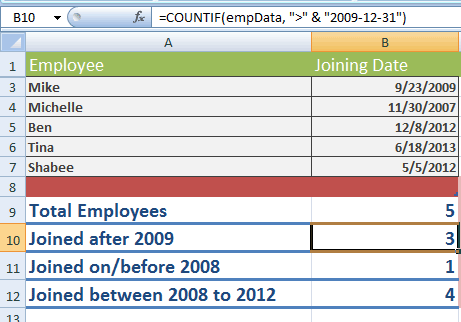 The formula to get the total number of employees:

Where empData is the range name containing cells A3 to B7.

The COUNTIF formula for getting the number of employees joined after 2009:

The last formula used COUNTIFS as we have two conditions to check. I will explain this in the COUNTIFS section.

An example of COUNTA function

If you require counting cells containing any type of data including numbers, text, empty string e.g. “”, dates, cells with error codes etc. then use the COUNTA function.

The COUNTA function will only omit the empty cells. See the following example, where I have used different types of values in Excel sheet and used COUNTA function for getting the count: 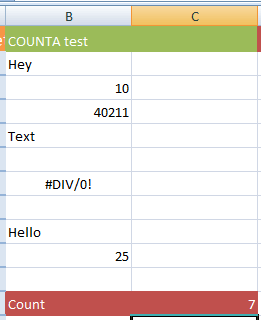 You can see, the resultant sheet displayed count as 7 as two cells in the given range are empty.

How to get the count of empty cells? 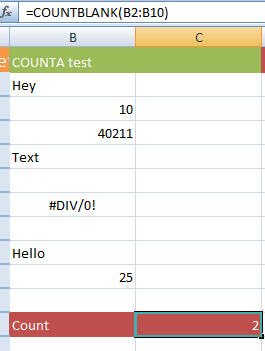 The returned count is 2 as you can see the given range contains two blank cells.

How to use COUNTIFS function

As mentioned earlier, if you have multiple criteria to check for getting the count in a range, array etc. you may use the COUNTIFS function.

For example, return the count of those employees who joined after 10/20/2012 and their salary is $5000 or above. We have seen, the COUNTIF enables using single criterion only whereas COUNTIFS allows us getting the count based on above two criteria.

For the example of COUNTIFS function, I am using the same Excel sheet as used in an above example that contains Months, Number of Sales and Amount columns.

The requirement is to count those rows which Number of Sales is greater than or equal to 110 and amount >= $15000. The COUNTIFS formula is: 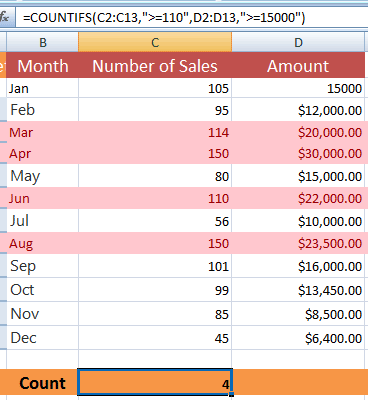 You can see, the highlighted rows met both criteria. If you look at the first row, the amount is $15000 that is true, however, the Number of sales is 105 which is False; so COUNTIFS did not include this row.

You may use up to 127 range/criteria pairs in the COUNTIFS function. In this example, I am using three conditions in the COUNTIFS. For that, extending the above formula and another criterion is added to return the count of those rows that start with month “J”. While the number of sales is set as greater than 100. 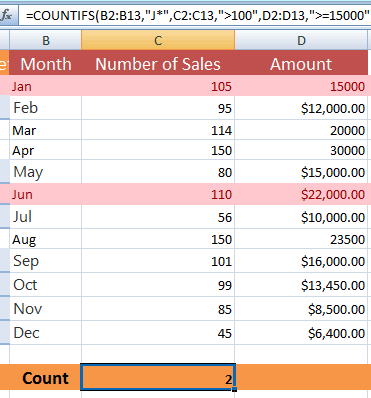 You see, I used ‘*’ wildcard as the first criteria i.e. B2:B13,”J*”. If you go through the table, only two highlighted rows met all the criteria given in COUNTIFS function.