For example, you may require breaking the phone numbers that are in that format:

Following are the ways of using the split method:

You may also use this method as follows:

That is, limit the number of splits in the given string by using the limit argument. The limit is given as int.

See the section below for the examples with code and output.

An example of completely breaking the string by split method

For demonstrating the Java string split method, a string object is created and assigned a value. In the split method, the delimiter used for breaking the string is a space character. As no limit parameter is provided, so complete string will break: 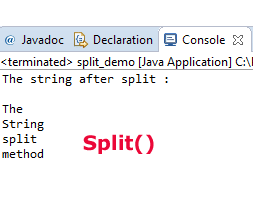 You see, the string is broken into four pieces. The for loop is used to iterate through the returned array for displaying its items.

Note: You may also use \\s regex for the space character.

Suppose, you want to break the phone numbers that are in string format as follows:

You just need to break this from first dash character while keeping the second intact. This is where limit parameter can play its role. Otherwise, simply using the split method will break the string completely; in that case, in three pieces. See the code below:

Similarly, you may use dot (.) as the character where you want to break the given string. Suppose, you have long paragraphs and the requirement is to break the paragraphs into sentences based on full stops. Here is how you may do this:

Note: the simple dot will not work. You have to escape the dot in order to break the string paragraphs based on full stop.

In some scenarios, you may need to split a string for multiple delimiters. For example, break the string with space, commas, hyphens, or other characters in one call. As such, the Java split method performs split based on given regular expression, so you may create such a regex that may accommodate all.

See this example where I will split the string with space, comma, dot, and dash by using regex:

The output of the above code is:

Note: The “|” represents OR in regex.

Similarly, you may create your own regex as per the requirement of the project.