The BorderColorAnimate plug-in is a simple way out of implementing the border color animation for any HTML element in DOM. The border color can be animated on click or as the mouse is entered into the specified element. You may customize it to be used for other events as well.

The solution is small in size, only 2 Kb minified version which is negligible if you are already using the jQuery.

Include the bordercoloranimate.min.js file in the <head> section.

Use the ID or class of the specified element in the jQuery code where you want to produce animation:

An example of animate border by jQuery on click

In this example, the border of a div element will animate upon clicking inside the div. Just click inside the div text to see it working. The animation will work once only. See the next demo for animating border on each click: 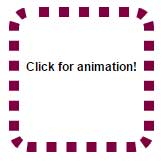 The following markup and jQuery code is used for this demo:

A demo of animating border on each click with options

In the following demo, the border of the div element will animate on each click with the provided colors. The duration of animation is also set in the jQuery code. For the demo, I specified the 1.2 seconds i.e. 1200 milliseconds:

Animate border on mouse in and out 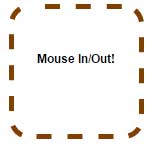 
Grab the complete code from the example page.

Not only you may animate the border of div or paragraph etc. but also other HTML elements like tables.

In this example, an HTML table is created with a little CSS for styling and thick border for demonstration. The border animation to the outer border of the table is done by using the plug-in. The animation will occur with mouse enter and out over the main border of the table. Have a look:

The similar code is used as in above example except for the ID of the table is changed.