Generally, the information is placed in different cells in Excel sheets for better organization of data. In certain scenarios, you may require a single string that is the combined result of various cells. For example, storing First Name and Last Name in different cells.

You may also use ‘&’ ampersand sign for concatenating string/cells in Excel. Both CONCATENATE and ‘&’ produce the same results.

The above syntax shows using a text string enclosed in double quotes and various cells separated by commas. You may also use numbers without double quotes in CONCATENATE function.

See the section below for various examples of using the CONCATENATE function which is followed by using ‘&’ sign.

An example of combining text strings

The example of concatenating cells

For the example, I will use an Excel sheet that stores student result information. The columns include Student ID, First Name, Last Name, subject marks and Total marks.

By using the CONCATENATE function, I will join First Name, Last Name, and Total as follows:

The resultant sheet of data:

You can see, the C8 cell displays the concatenated result based on above formula. There, I also used space by “ “ to be used in concatenation.

Did You Know? From the Excel 2016, the CONCATENATE function is replaced by CONCAT function. Microsoft recommends using CONCAT from now on as, though CONCATENATE is available due to backward compatibility but maybe not available in next versions. The CONCAT allows joining ranges as well.

The example of using numbers in CONCATENATE formula

The following example shows using the numbers, text strings and cell references in the CONCATENATE formula:

The output of above formula in our example sheet:

As mentioned earlier, you may also use the ‘&’ sign for concatenating cells or text strings, and numbers in Excel.

The following example uses the same Students Excel sheet and this time I will display the total of student “Hina” by concatenating different cells and strings:

You can see, the result is achieved as we got by using the CONCATENATE function. In the case of ‘&’, no commas are used for separating the cells or text string. Besides, no parenthesis is used.

You may use any of the technique that you are comfortable with. 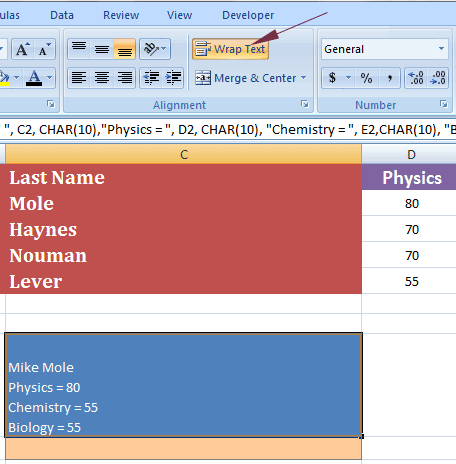 Alternatively, press Ctrl + 1 or right-click in the cell where you are using this formula. In the menu, select “Format Cells” option. In both cases, it should open the “Format Cell” dialog. Go to the Alignment tab and check the “Wrap Text” option as shown below: 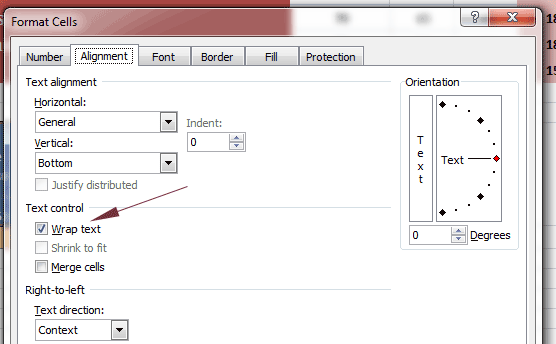 The following example is even more complex that uses INDEX and MATCH functions in an Excel sheet that contains dummy product information.

As you enter a product name to search (with wildcards), the formula returns product information that includes Product name, price, and its status. First, have a look at the formula and resultant sheet and I will explain how it worked: 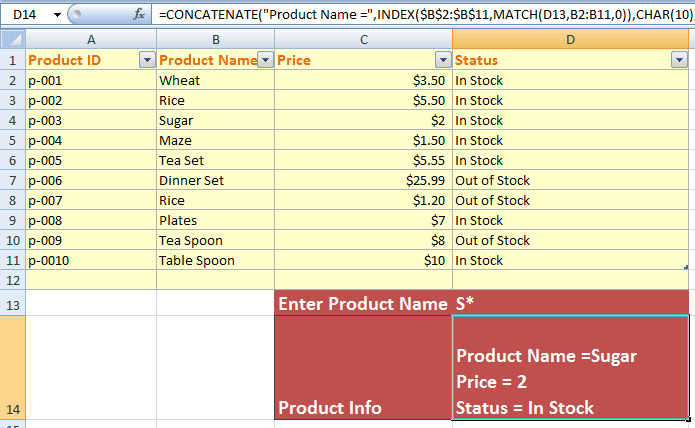 Looks big formula, is not it? You may break this formula for simplification as follows:

This formula returns the product name. You can see, I searched “S*” that found Sugar. Similarly, INDEX/MATCH functions are used two more times for returning the price and status, respectively.

All these formulas are placed inside the CONCATENATE function with CHAR(10) for adding line breaks for proper formatting.

You may download this example sheet and try searching different products and see the outcome. Give exact names or search by wildcards (* and ?).

You may learn more about INDEX and MATCH by following links.

As for as CONCAT is concerned, you may provide the range as follows:

It will return all values concatenated from cell A2 to B10. However, this formula is applicable from Excel 2016.

How to include double quotes in the concatenated string?

The following example shows using double quote in the string within CONCATENATE function.

You can see, using double quotes four times added one in the result. Also note, if your cells contain double quoted text, Excel manages that itself and there should not be an issue.