You want to count the number of times word “Microsoft” appears from the cell A2 to A1000. How can you do that? One way is to go through each cell one by one and keep adding as you find a match OR

Use the Microsoft Excel COUNTIF function (a statistical function) that is used to count the number of cells for the given criterion.

Simply provide range and criteria in the COUNTIF Excel function as follows:

Just select the cell where you want to display the result and there you go! So, In the COUNTIF function, you need to specify

In the next section, I will show you a variety of examples of using the COUNTIF function in excel with images, so keep reading.

The syntax of using the COUNTIF function is:

An example of using Excel COUNTIF with text

This is how COUNTIF is used: 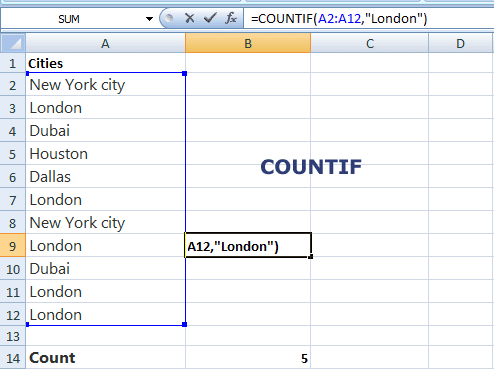 The example of COUNTIF with cell text

For this example, rather than providing the text in COUNTIF function, the cell’s text is used as the criterion. For that, you may place the cell after the range as follows:

In that case, the A8 text is used to search and count in the given range (A10 to A20 in that case). See the following example: 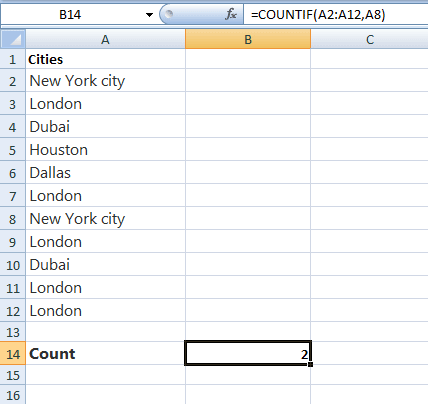 You see, the A8 cell contains “New York City” and the count result is = 2.

What if you require the count of two cities in our example sheet i.e. “London” and “New York City”? You may use COUNTIF twice or more for accomplishing this. For example:

So, one criterion can be specified per expression and plus sign is used. Similarly, you may add more expressions with separate criteria.

See the following example where I have added more cities in the column B and used expression twice. The result should be the count of London and New York City. See the formula and output:

The formula for using COUNTIF in Excel twice: 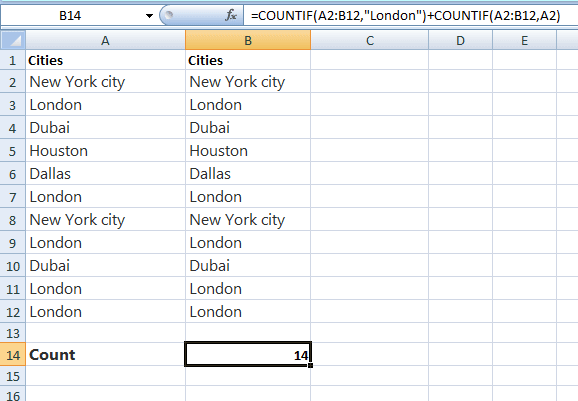 You see, the occurrence of London is ten times while New York City is 4 times and total count displayed as 14.

Note: Alternatively, you could also use COUNTIFS function for multiple criteria. See the example below.

The example of using multiple criteria by COUNTIFS

In the following example, two criteria are specified by using the COUNTIFS function of excel. The occurrence of London in column A with corresponding numeric value in column B. We will get the count of London and value greater than 1. See the result and formula: 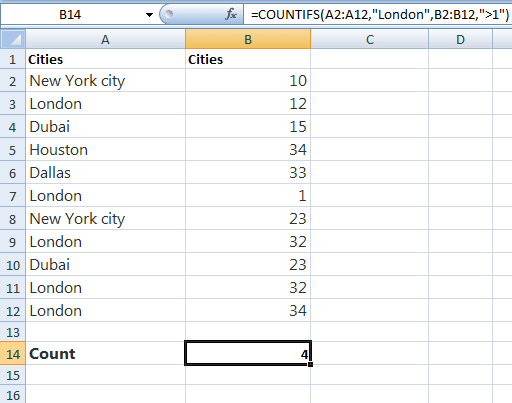 Although the London occurrence is five times, however, in column B, one corresponding numeric value is 1, so the count is 4.

As mention earlier, you may also use the expression in Excel COUNTIF function. For example:

In the next example, we will count how many Months have sales over 1000. For that, we have a Month column (A) and the other represents the number of sales (B). 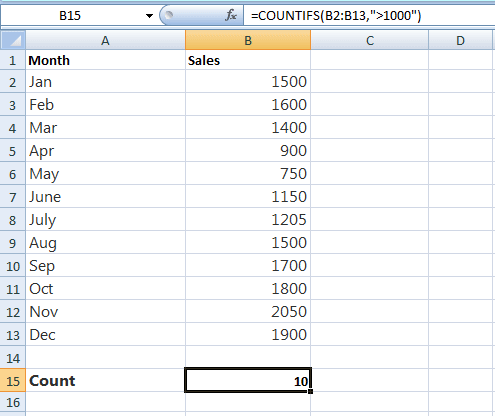 The example of not equal to <> operator

We will use not equal to operator with cell rather than a direct value. The requirement is to return the count of sales in a Month not equal to 1500. Have a look how it is done. 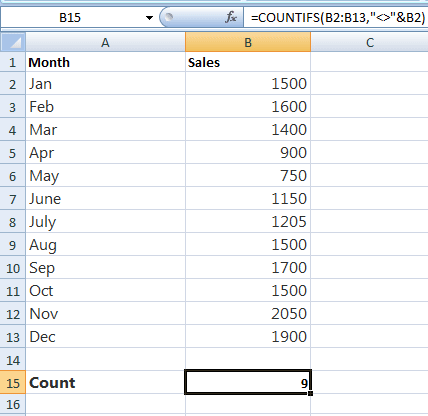 Did you notice the ampersand (&) sign? This is used to merge the comparison operator with cell value. It makes value of B2 for reading as =COUNTIFS(B2:B13,”<>1500″).

Tip: So be careful as you intend to compare numbers and taking the value of cells.

You may also use multiple expressions for defining two or more conditions.  For example, return the Months count (in our example sheet), with sales greater than or equal to 1200 and less than 1800.

This is how it can be translated into Excel’s COUNT IF function: 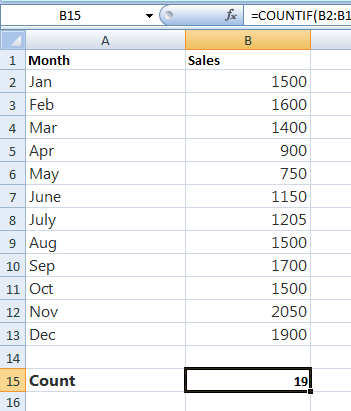 You see, the result is 19. First, the formula got 9 based on first COUNTIF and 10 for the second COUNTIF function. The + is used to sum up the two and so result is 19. If we used ‘-‘ minus, the result would have been -1.

Not the output you expected by giving two expressions? Well, might be you were expecting Month count between 1200 and 1900 rather than the sum of two? If that was the case, see next example.

This should answer your question. The two expressions are given in the COUNTIFS function to get the count of Months with sales between 1200 (greater than or equal) and less than 1800. Now see the formula and output:

The (*) wildcard character is used to count cells with any text. The example below shows how to use this. Along with using * as a wildcard, another thing to learn in this example is that a few cells are kept blank to show how COUNTIF treats blank cells.

I have filled the cells from A2 to A11 with fruits and vegetable names. However, the 6,8 and 10 cells are kept blank. The following formula is applied to get the row count with *: 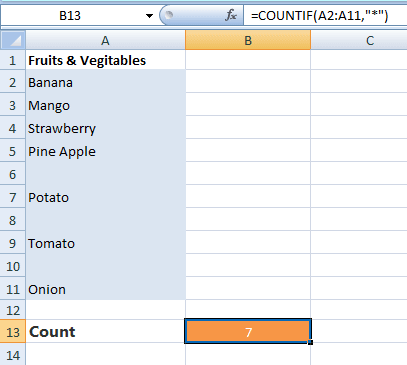 You see, * counted all rows with any text while the blank cells are not counted.

The example of ‘?’ wildcard

The question mark (?) is also a wildcard that can be used in COUNTIF function. It is used to match the individual character.

This example gets the count of cells where the text has 6 characters and ends at “to”. See how to use the ‘?’: 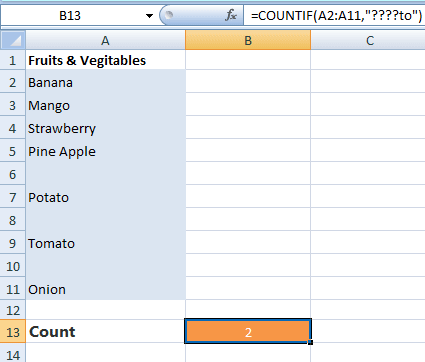 You see, it returned the count as 2 for Tomato and Potato.

An example of COUNTIF with dates and range names

In all above examples, I used cell range like A2:10 etc. For this example, two more things are done for using the COUNTIF function.

First, range name is used. Secondly, the counting is based on dates. For that, employee’s sheet is created that contains Employee Names and their Joining date.

The cells containing data of employees is named empData as shown in the graphic below: 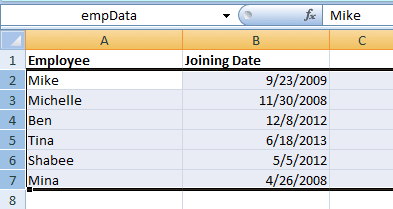 The results are displayed in the cells B9, B10, and B11 cells as shown below: 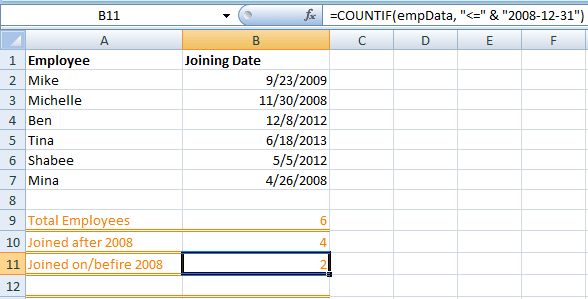 The output (notice the last one) 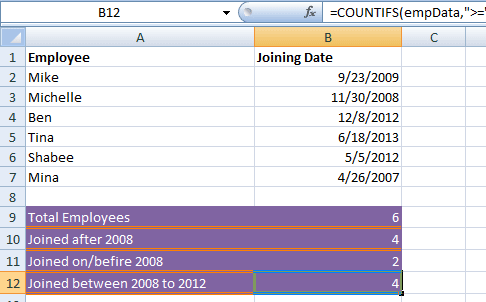