The Bootstrap multiselect with jQuery

The multiselect dropdown allows the visitors of the website selecting multiple options from a dropdown in a form.

Although, you may achieve that by using the multiple attribute in the <select> tag of HTML, however, instead of a dropdown, a list view type is displayed that allows users choosing multiple options.

In this article, the bootstrap-multiselect plug-in which is based on jQuery is used for creating the dropdowns with multiple select feature that also looks beautiful. It uses Bootstrap framework, so Bootstrap CSS and JS files are also included in the demos.

First of all, you may download the plug-in from the Github website by following this link. The demo and setup page can be seen there that is shared by the developer that contains a lot of options and respective code.

The demo HTML is quite large there and I am just trying to break up the big demo page into smaller here.

Have a look at this simple demo with only a single dropdown and minimum required files: 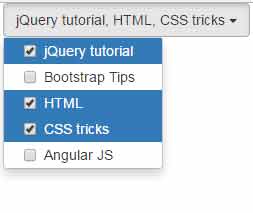 A demo with option groups 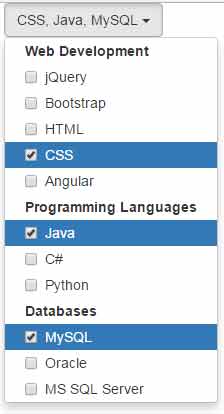 The script and markup:

A demo of selectable optional group

By adding the enableClickableOptGroups as true in the jQuery code, you may enable users to select the option group itself, thus, all options under that group will be selected at one click / selection including the option group. Have a look: 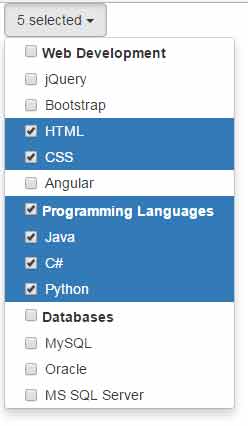 The only difference between this and above example is the use of the option in the jQuery code: 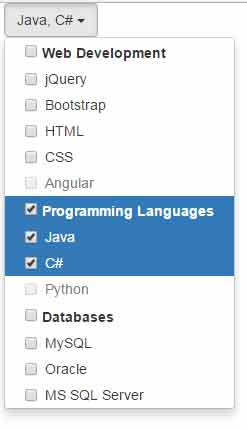 You can see, the Python option is disabled in the dropdown.

You may also create the dropdown with collapsible option groups by using this multiselect Bootstrap plug-in. So, if a group is clicked, its options will collapse and if clicked again it will expand.

For that, simply set the:

in the jQuery code as shown below: 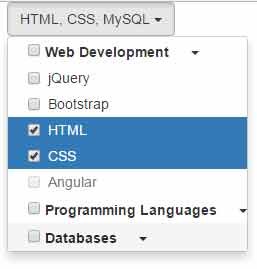 
Setting width of the dropdown example 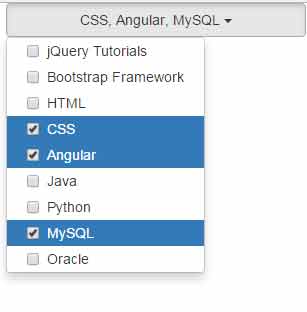 A demo of multiselect dropping right

By default, the options in the dropdown falls left whether using this or ordinary HTML select dropdown. You may also drop it right by using the dropRight: true option: 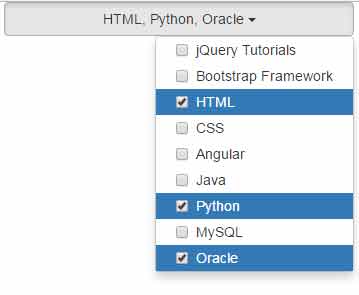 A demo of dropping multi-select towards top

Similarly, you may drop the options towards top rather than default downwards. See the demo by clicking the image or link below: 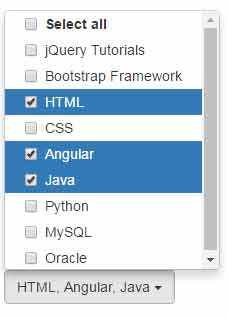 
A demo with filtering options

You may add a search box for filtering the options inside the multiselect dropdown. For that, simply add the following option in the jQuery code:

This option will add a textbox where a user may enter letters to filter out the options. See this demo: 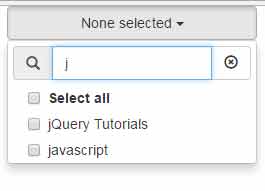 The markup remains the same as in many other examples for showing the multiselect dropdown.

Changing the default text when none of the options is selected

In all above examples, the text displayed if none of the options is selected is: “None Selected”.

You may change this text in the context of the multiselect dropdown. For example, in our examples, I am using the web development, programming languages and databases for selecting the expertise. I will use the “Select expertise!” if none is selected as follows: 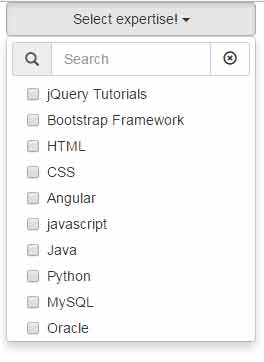 Other options for the multiselect dropdown

HTML select dropdown: Learn to Create and style with CSS

Bootstrap select – Learn to use with 5 beautiful styles